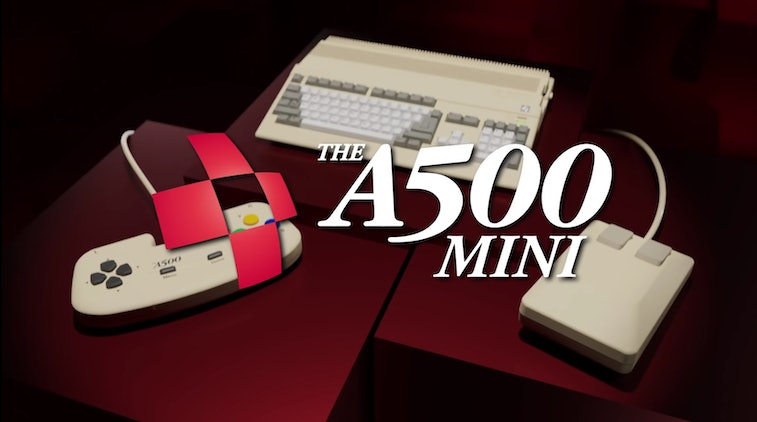 First released in 1987 sporting a 16/32-bit CPU and 512Kb of RAM, the Commodore Amiga 500 is up there in the pantheon of 16-bit personal computer gaming systems. Although the product has long been discontinued, Retro Games Ltd. has just announced its latest ode to vintage gaming with the THEA500 Mini, a “compact reimagining” of Commodore’s classic Amiga 500 computer which can fully emulate its inspiration, as well as the A1200’s Advanced Graphics Architecture (AGA).

Featuring 25 classic games like Alien Breed, Worms: The Director’s Cut, and Simon the Sorcerer, the THEA500 Mini will also allow players to upload their own games, or even firmware revisions via a USB stick with WHDLoad support, as well as store save files on the machine to continue games whenever they’d like.

Aesthetically, the THEA500 Mini looks absolutely stunning, complete with an on-screen keyboard, two-button mouse, and “newly engineered 8-button precision gamepad.” Players will also be able to use their own keyboards via the USB port. Only 12 of the 25 games have been announced so far, so expect to see some more familiar titles released before the THEA500 Mini is available for purchase in early 2022 with a suggested retail of $139.99. Check out the announcement trailer below for a better look.

Not the only Commodore causing a commotion — Sorry. But the new swath of retro computing and game options have just been a lot of fun lately. The THEA500 Mini isn’t the only Commodore release that’s gotten a reimagining this year. Earlier this summer, someone actually designed a Commodore 64-inspired smartwatch that emulates the classic computer’s home screen. It even includes the ability to write BASIC coding, which while not necessarily the most useful accessory, is certainly pretty cool to look at.

While it’s not an official product like the THEA500, it doesn’t look all too difficult to follow the creator’s instructions on Github to install the Commodore-esque operating system on a $45 LiliGo watch.

You don’t have to stay at home for your retro gaming — Given the huge strides in technology over the past few years, as well as a truly diehard fanbase, retro gaming has never been easier to get back into, either at home or on the go. For those looking to indulge in some 16-bit nostalgia outside your living room, head over to our primer on the best retro handheld gaming devices on the market right now.