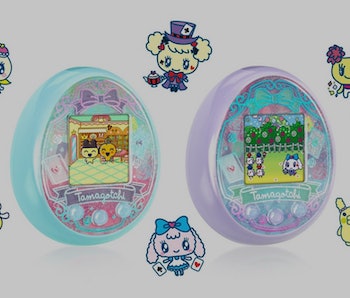 The Tamagotchi On family is getting an exciting new addition. As spotted by multiple Redditors last week and now confirmed by Bandai, the company is gearing up to release another title, Wonder Garden. The whimsical Alice In Wonderland-inspired device will come in two colors — lavender and turquoise — and brings with it two exclusive characters, the Wonder Garden Land theme park, and new games in your town.

Minor but exciting changes — Wonder Garden looks as though it will play a lot like the Magic and Fairy iterations of Tamagotchi On. What’s changing mostly here is design, with a pretty new two-tone gradient faceplate complete with a bow and playing card illustrations for the physical device, plus a new home screen and room option. There are also two new games, Library and Dressmaker.

It appears to be a spinoff of Japan’s Fantasy Tamagotchi Meets, though with the focus solely on the Wonderland elements. Kind of a bummer that we won't get the full Fantasy experience, but Wonder Garden looks pretty fun nonetheless. For those of you who have been playing in the associated app, you may already have run into the two characters that are now finally coming to the U.S.: Yumemi-Alice and Kirarihatter. That should help alleviate some of the Meets-envy for the time being.

Give it to me now — The news of this release comes at a time when everything is, well, terrible, and the Tama fandom outside of Japan has been anxiously awaiting the next drop for months. Now more than ever, it feels nice to have something pure to look forward to — and, most importantly, an imminent release date. Pre-orders for the Wonder Garden Tamagotchi On are now open at Target, Amazon, Walmart, GameStop, Best Buy, and Entertainment Earth. It ships July 26 and, like the others, costs $59.99 (worth it).

Read More: Tamagotchi On review: the perfect antidote to the daily hellscape of modern life