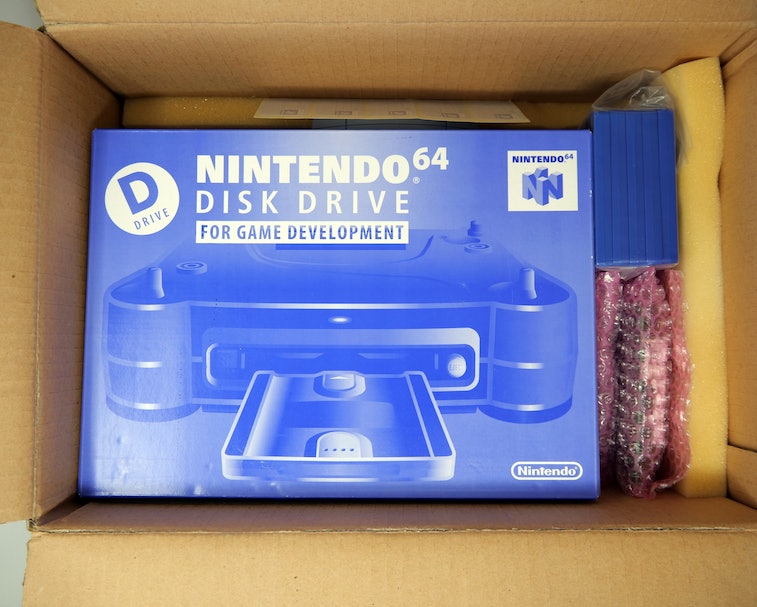 It’s a rare day when reality matches up with our nostalgia-fueled obsessions (of which we have many). This is no more true than in the world of retro gaming, where sometimes living out our ’90’s fantasies requires tracking down chunky CRT televisions and praying they work.

Even watching rare finds play out from afar can be exciting — like the documentation of this Nintendo 64 Disk Drive development kit found by a private video game collector. The collector reached out to Shane Luis, host of the Rerez TV YouTube channel, for his help in sharing the joy of the development kit with the world.

The Nintendo 64 Disk Drive (commonly referred to as the 64DD) is exactly what it sounds like: a disk drive peripheral for the Nintendo 64 console. It allows the N64 to use proprietary 64MB discs for expanded game capabilities, along with some internet connectivity.

The 64DD wasn’t exactly popular amongst Nintendo fans. Developers didn’t take to it very well, either — making this reveal all the more stellar.

Let’s bask in these photos — The bulk of Luis’ project is high-quality photos of the 64DD dev kit, something the internet has never really been privy to. Luis has made the photos available for free distribution via the Internet Archive.

Ahead of its time — Only 10 pieces of software were ever actually released on the 64DD, partly because the peripheral was hit with years-long release delays. When it did finally release in 1999, it stayed exclusive to Japan — and it sold just 15,000 units before Nintendo discontinued it in 2000.

Despite its commercial failure, the 64DD is important to Nintendo history. On its most basic level, the peripheral greatly expanded the hardware capabilities of the Nintendo 64. Suddenly it wasn’t limited to those grey cartridges anymore.

The 64DD also included a rudimentary internet connectivity system over a service Nintendo called “Randnet.” For a small monthly fee, 64DD users could browse the web, post on members-only message boards, and exchange game content with other users. The subscription fee even included the 64DD system itself and monthly delivery of new 64DD game disks.

These features are pretty standard for gaming consoles in 2021. Two decades ago they were unheard of. Just another reminder that Nintendo has always been on the cutting-edge — even if its experiments are sometimes too big to be successful.