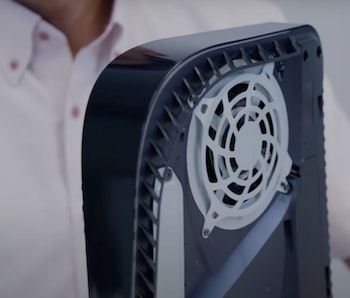 As the latest iteration of the Console Wars looms, Sony has been taking every opportunity to showcase the incredible hardware housed inside the PlayStation 5’s curvy white body. We’ve now learned that Sony plans to actually make improvements to that hardware via software updates as the company learns more about the console’s behavior in the wild.

Yasuhiro Ootori, Sony’s head of mechanical design for the PS5, spoke a bit about Sony’s optimization plans — specifically for the console’s huge cooling fan — to Japanese website 4Gamer.net. We have Ootori to thank for overseeing the creation of such an immaculate piece of hardware.

Ootori revealed in this exclusive interview that the PlayStation team plans to use game software updates to improve the efficiency of the PS5’s cooling fan moving forward. That could be monumental for the console’s long-term viability if utilized properly — and it could provide the PS5 another leg up over the Xbox Series X.

Cool doesn’t begin to describe it — In his recent teardown of the PlayStation 5, Ootori made sure to linger on the PS5’s custom cooling fan. There’s a great reason for this: the fan is awesome. It’s 120mm in diameter, 45 mm thick, and capable of drawing in large amounts of air from both sides of the console.

In his 4Gamer.net interview, which was generously translated by ResetEra user orzkare, Ootori gives a few more important details about that fan system. We know now that the fan will be controlled by both the PS5’s Accelerated Processing Unit and the combined CPU / GPU chip, for example.

We know also that the cooling fan will only keep improving from launch day onward. Ootori says the PlayStation team has a plan to “optimize the fan control” based on game-specific benchmark data. This will allow Sony to make tweaks to the fan’s performance if it’s not living up to par while handling heavy graphics and computing loads.

All in the details — Both Microsoft and Sony have created impressive pieces of next-gen hardware for gamers to lose thousands of hours to. The flagship Series X has an unheard-of 12 teraflops of computing power; the PlayStation 5 has a state-of-the-art custom cooling system, amongst other thoughtful touches.

The stakes are high, then, to put effort into the minutia of each console. For Sony, that’s meant being candid and transparent about every screw holding the PS5 together. Microsoft has been more tight-lipped about the Xbox Series X hardware. That could affect Microsoft’s console sales, given how open Sony’s been about its attention to detail.

There’s still a few weeks left before we actually have the chance to play games on either console, though. Maybe Microsoft will prove us wrong on launch day.