“We have been quietly but steadily investing in high-quality games for PlayStation, and we will make sure that the PS5 generation will have more dedicated software than ever before.” 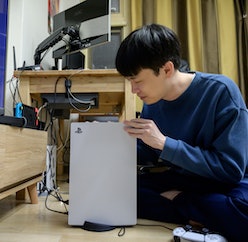 In an interview with Nikkei, which was translated by Video Games Chronicle, Sony Interactive Entertainment CEO Jim Ryan recently revealed that PlayStation was "quietly" working on creating games that were exclusive to the PlayStation 5, making the console even more enticing.

The company is investing in developing first-party programs, Ryan noted. The CEO's comments confirm the rumors that Sony has been pursuing in-house development opportunities more aggressively with PS5 compared to PS4. "We have been quietly but steadily investing in high-quality games for PlayStation, and we will make sure that the PS5 generation will have more dedicated software than ever before," Ryan told Nikkei. "We have repeatedly engaged in mergers and acquisitions, including Insomniac Games in the United States. We will not rule out that option in the future."

Expect a bunch of action in 2021 — The entertainment company will release the psychological horror thriller shooter game Returnal by Mousemarque on April 30 and the third-person shooter game Ratchet and Clank: Rift Apart by Insomniac in June. On top of this, PlayStation 5 will see the release of the action-based roleplay title Horizon Forbidden West by Guerilla and the mythology-based action game God of War: Ragnarok later this year as well.

Cloud on the horizon — Apart from bringing PS5-exclusive powerhouse games to the platform, Ryan has hinted that Sony may become more active at following its plans in regards to a "strategic partnership with Microsoft" which would use the Xbox Azure data centers for cloud gaming. Ryan did not elaborate any further about the plans but noted that Sony was working on an offering between both firms. He said, "When the time is right, we'll announce our cloud strategy," which is expected to be unique to PS5 only.

It's no surprise that Sony is working on making PS5 games more exclusive. As it competes with rival gaming platforms, the company is getting a little more cutthroat with game availability. By the end of 2021, we might be able to see if Ryan’s business model results in boosted user retention and engagement or if it ends up losing to Animal Crossing: New Horizons like everyone else.