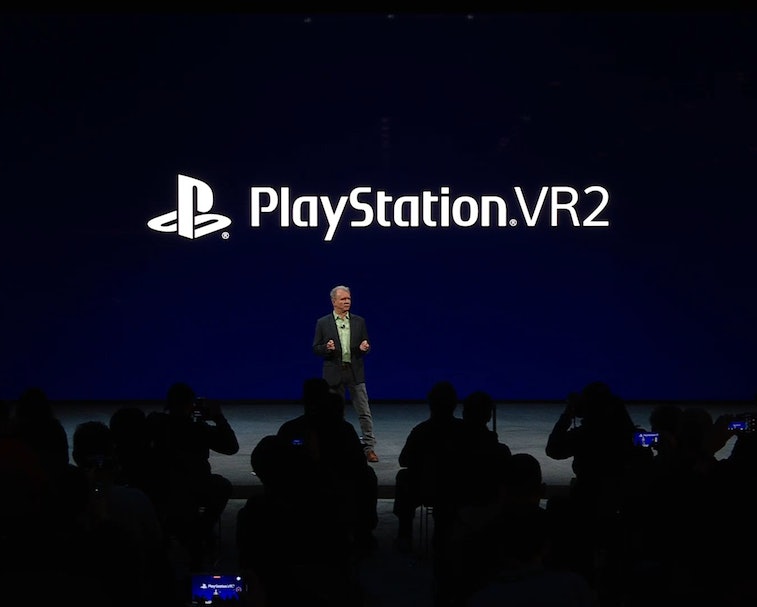 Today at its CES 2022 press conference in Las Vegas, Sony introduced PlayStation VR 2, the sequel to its successful PSVR platform, for the PlayStation 5. Alongside the hardware, the company announced an exclusive, original title in the Horizon series.

According to the company’s blog post, the headset features haptic feedback, Bluetooth 5.1, Tempest 3D audio, a 90/120hz OLED display with 2000 x 2040 pixels per eye, USB-C, 4 internal cameras for headset and controller tracking, and IR proximity sensors for eye tracking. The most anticipated feature seems to be the upcoming haptic feedback:

Headset feedback is a new sensory feature that amplifies the sensations of in-game actions from the player. It’s created by a single built-in motor with vibrations that add an intelligent tactile element, bringing players closer to the gameplay experience. For example, gamers can feel a character’s elevated pulse during tense moments, the rush of objects passing close to the character’s head, or the thrust of a vehicle as the character speeds forward.

Metaverse — With the so-called “metaverse” being all the rage these days, it only makes sense that the massive gaming corporation would waste no time ensuring its place in the new wave of virtual reality. Thanks to its early stake in the market, Sony can tout hundreds of games ready for players on day one. Unlike standalone headsets like the Meta Quest 2 from don’t-call-it-Facebook, Sony will be able to tap into the insane graphical power of its PlayStation 5 hardware which should give the platform quite the advantage.

Forbidden treasure — To ensure gamers stay incredibly hyped up for the new hardware, the company also announced that it is developing Horizon: Call of the Mountain, a new game in its post-apocalyptic techno-dinosaur hunting franchise. Since everyone seems to really, really, really like those games — and since archery is a uniquely good fit for virtual reality motion controls — we’d judge this move as super effective.

Players generally enjoyed the PSVR’s original hardware, though the days of using a system of cameras and lights to track motion-based gameplay seem firmly behind us.

Supply and demand — Unfortunately for the company, it remains extremely difficult to purchase a PS5 thanks to ongoing supply chain issues related to global health and economic crises. Hopefully, Sony has an easier time sourcing lenses and controller parts — or we may be waiting years to get a peek at Alloy’s skills in all their three-dimensional glory.

Release date and purchase price are still to be announced... but we’ll bet anything we see the hardware hit shelves in 2022.