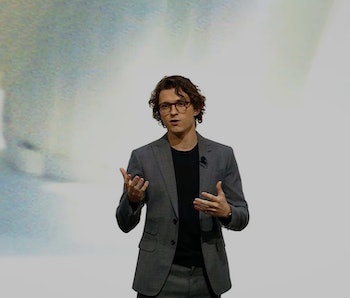 In what seems like a gigantic flex specifically designed to get revenge on me (for whatever reason), Sony trotted out the world’s biggest movie star, Tom Holland, to promote the company’s products and look adorable in the otherwise vacant halls of CES 2022. Unfortunately, the staff of Input could not attend due to the ongoing plague.

Despite the fact that I could not see him in person, the friendly neighborhood wondertwink himself gushed about his love of all things Sony: the Spider-Man series (the latest being the #1 movie in America, in which he stars), the Uncharted franchise (an upcoming film adaptation of the popular Sony game series, in which he stars), and the PlayStation 5 (in which he... kinda stars).

When Sony Pictures Entertainment Motion Picture Group CEO Tom Rothman gave the stunningly handsome superhero a moment to speak, Holland joked about the size of the company’s insurance policy on him and the free PS5 setup Sony supplied him and the entire Spider-Man: No Way Home cast (presumably including Marisa Tomei) with. Apparently, Sony needs me to know that there is a trailer somewhere loaded with Sony electronics, Oscar-winning actress Marisa Tomei, and one of the cutest men Hollywood has ever produced, and I’ll never be allowed to visit.

While I like to joke that anyone at Sony cares what I do, I actually just wanted to point out that Tom Holland is now functionally the mascot of the Sony Corporation (bye, bye Sackboy!) and it makes him dance at a whim in front of crowds of executives and fellow media companies. Anyway, now that we’ve all seen Spider-Man: No Way Home, let’s all get excited about also seeing Uncharted, a scene from which he introduced at the show and which looks surprisingly good for a video game movie.

I eagerly await the inevitable Tom Holland: The PSVR 2 Experience.