Sonic co-creator, Yuji Naka, learning of the $430K sale of an original copy of the game. 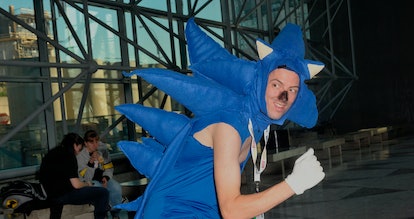 One of Sonic’s dads, Yuji Naka, appears to have joined the growing chorus of critics concerned about potential price inflation and collusion within the retro video game auction market after a copy of the first Sonic the Hedgehog game for Sega Genesis sold for a mind-numbing $430,500, purportedly the highest price ever for a Genesis title.

He also did it with perhaps the biggest Online Dad energy in recent memory, retweeting Goldin Auction’s announcement alongside the question, “What’s this,” minus a punctuation mark yet preceded by a hedgehog emoji. We’ve screenshot the tweet below, for posterity’s sake.

“Is it a scam?” — Naka followed his initial tweet only a few minutes later with a simple question on many’s minds these days: “Is it a scam?” followed by the more assured-sounding, “That's a scam, right? I wondered if it was time for Sonic to reach a high.”

Naka would later concede he “saw the news that Mario was sold at a high price recently, so I thought Sonic was also a high price, but it's different. I'm sorry.” Believe us, Mr. Naka, you are not the one who needs to apologize right now. Also, completely off-topic, but we absolutely love the fact that Naka uses two spaces between sentences.

Goldin Auctions founder, Ken Goldin, replied to Naka’s tweet, saying “this is a genuine sale to a real buyer,” and that the company vets all bidders.

Increasing suspicion from bystanders — The latest ridiculous retro gaming auction sale comes after months of record-shattering bidding wars for titles ranging from Super Mario Bros., to Super Mario 64, to The Legend of Zelda. If $1.5 million for a single, albeit historically significant, video game seems sketchy to you... well, you aren’t alone. Last month, YouTuber Karl Jobst posted a nearly one-hour-long video laying out his case that Heritage Auctions and the video game grading company WATA Games have been working in tandem to pump prices within the auction market, citing their cuts of the final bids as the reason.

Both Heritage and WATA deny these allegations, of course, but given the immense spike in retro gaming auction prices lately, it’s hard not to view the whole situation without at least some skepticism. And let’s be totally honest here: If you upset or confuse Yuji Naka, regardless of the reason, you’re on our Watch List. That alone is grounds for concern.