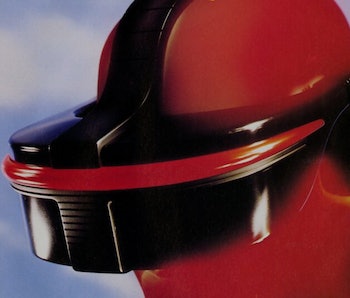 The younger among us might think of virtual reality as a novel concept introduced by the likes of Oculus and HTC, but the gaming industry actually took its first stab at VR back in the early '90s. Nintendo released the Virtual Boy in 1995, releasing only 22 games before it ceased development a year later. Another such project never even got that far — the Sega VR, which was unveiled in 1993 before being quietly canceled in 1994.

Nobody ever got to try the Sega VR and see exactly why it was nixed, but now game preservationists at the Video Game History Foundation (VGHF) have managed to get a hold of a game for the Sega VR and rebuild it for existing VR headsets. The game, Nuclear Rush, is revealing in why Sega canceled the headset.

Insanely low refresh rate — Rich Whitehouse, the head of digital conservation at the VGHF, found after rebuilding the game that the headset had a pitiful refresh rate of just 15Hz, compared to the 72Hz rate on the latest Oculus Quest 2 (the HTC Vive is even better at 90Hz). The refresh rate indicates how many times per second a screen refreshes its image. Rates that are too low can make the screen look like it's flickering, and cause eye strain as you try and focus on something the image. Just imagine turning in different directions and everything in your vision is jittery, moving far slower than your eyes themselves.

The Sega VR also had limited three-degrees-of-freedom movement. You had to remain seated, and it didn't even track roll, or tilting your head side-to-side. It could track your head moving up and down and in a 360-degree circle.

Sega never said why the headset was canceled, but former Sega president Tom Kalinkse eventually suggested that the refresh rate was to blame. He said that a huge percentage of testers fell sick with headaches and dizziness. Motion sickness is generally caused by parts of your body that sense motion, like the tilt sensors in your ear, not lining up with what you're seeing in your visual cortex.

You'll really want to watch the video below of Nuclear Rush running on an HTC Vive to see just how disorienting gameplay looks at such a low refresh rate.

Poor testing — Incredibly, engineers for Nuclear Rush and another Sega VR title Outlaw Racing told Whitehouse that they didn't experience the headaches because they never had an actual headset to test on — they tested their respective game's outputs on two side-by-side computer monitors to see how it might look. But the problem here is that when you're just watching a small screen, your brain knows the picture is moving and not the rest of the room. Your brain agrees that the room is still. A headset messes with that by capturing your whole field of view.

It sounds like Sega waited far too long to conduct testing of gameplay in the headsets, and by the time it realized the problem, it was too late.

Nintendo's Virtual Boy failed for a slightly different reason — it wasn't actually virtual reality, but really glorified 3D images using red light, like the cheap 3D glasses you might remember using as a kid. There was no motion tracking.

Virtual reality has come a long way since the '90s, with advances in screen technology and sensors allowing for faster refresh rates and more accurate tracking necessary to address sickness. Some people still experience issues, however.

If you want to learn the whole story of how the Nuclear Rush ROM was acquired and rebuilt, there's a full report at the Video Game History Foundation.