Someone just made a smooth 100K off an ‘Among Us’ McNugget 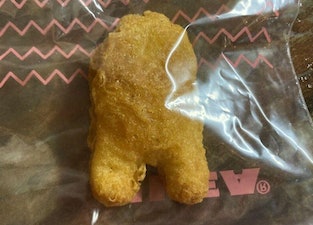 A stale McDonald’s chicken nugget shaped something like one of the avatars from Among Us just sold on eBay for $99,997 — enough cash to buy approximately 20,000 regular 20-piece McNugget orders. The bidding began at $0.99 on May 28 and didn’t rack up any offers for two days, when one user raised their bid to about $15,000.

As if the nugget’s shape wasn’t intriguing enough on its own, it’s made even more one-of-a-kind by the fact that it apparently came to the seller as part of the limited-edition meal created in conjunction with K-pop icons BTS.

Interest in Among Us — a game first released in 2018 — spiked during the COVID-19 pandemic, as it allowed for simple multiplayer gameplay despite social distancing. The game’s characters have obviously become so ubiquitous that something as simple as a chicken nugget can quickly become a hundred-thousand-dollar collector’s item.

We have a few questions about all this, not the least of which is whether or not this nugget is edible.

Among the hype — Among Us was one of the most popular games of 2020, despite actually being released two years earlier. The game’s shallow learning curve, inexpensive price point, and focus on multiplayer capabilities made it the perfect mid-pandemic video game. The game garnered so much interest that high-profile politicians Rep. Alexandria Ocasio-Cortez and Rep. Ilhan Omar streamed their Among Us gameplay to more than 400,000 Twitch viewers. Its popularity in late September 2020 was so intense that it sent Discord’s download numbers skyrocketing to all-time daily highs.

Even with this in mind, $99K is a steep price to pay for some accidental Among Us memorabilia. It’s proof the fandom is alive and well, I suppose.

But can you eat it? — Here is perhaps the most pressing question: Will the winning bidder be able to safely eat the Among Us nugget, if they so choose? The seller is doing what they can to make that an option; according to the original listing, the McNugget is being frozen and air-sealed before it’s sent out, with a promise that it will be delivered “prior to expiration,” which the seller says is about 14 days.

We’ve got no clue where that info comes from, though, so eating it once it’s arrived is definitely a little sus. But then again, someone who paid $100,000 for a chicken nugget probably isn’t planning to devour it.