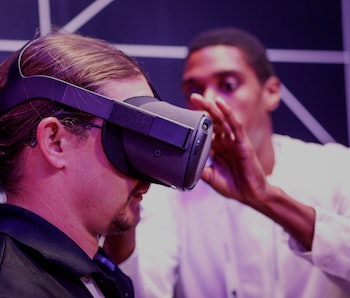 The Oculus Quest is the first virtual reality headset that’s really gone mainstream, but the Oculus Store is curated by parent company Facebook, and you’re limited in what you can find there. A new Android app from SideQuest makes it easy to sideload what some might call “exotic” VR content available in its own alternative store.

Expand your horizons — SideQuest already offers a desktop app that allows you to do this, but with the new app, you can browse SideQuest’s storefront and install apps on the go. SideQuest’s store offers a cool assortment of apps like Virtual Computer, which lets you use your desktop computer in a virtual workspace, and Gorilla Tag, a game in which you play tag, but as a gorilla.

While you can get some of these apps in the Oculus Store, others you can’t. For instance, Doom 3 for VR is available for purchase through Valve’s Steam storefront but not the Oculus Store — thankfully someone published a special port in SideQuest. There’s also this fan-made Pokemon VR game that lets you compete against friends in multiplayer battles. So, you’re unlocking some neat stuff through sideloading.

No Facebook approval necessary — Developers might offer their apps through SideQuest because it’s easier to release experimental projects there — would Facebook approve an unauthorized Pokémon game? Probably not. Or maybe developers are just philosophically opposed to supporting Facebook as a company. That’s a tricky part about Oculus — it makes some of the best and most affordable VR headsets, but buying one supports the social media giant; you have to create a Facebook account to even use the Quest.

If you don’t have an Android phone, SideQuest is available on Mac, Windows, and Linux. To actually sideload games to your Quest, you need to enable Developer Mode on the headset. It’s pretty easy — this article includes the instructions.