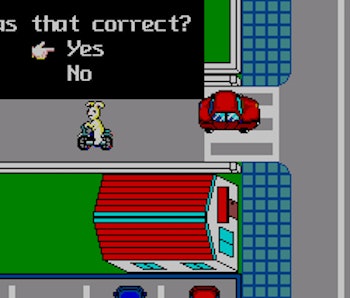 Driving safety fans rejoice! A little-known Sega traffic safety game from the late-'80s has been saved and translated by a group of game preservationists. Game de Check! Koutsuu Anzen — which translates roughly to Let’s Check With a Game! Traffic Safety — was produced by Sega for use in traffic safety campaigns. Now it’s found a new home on the internet.

Sega is perhaps best-known for a recklessly speedy hedgehog named Sonic, but the company has dabbled in other video game genres and the creation of its own consoles, too. Like most video game companies, Sega also has a vault full of titles that the public barely knows about. What other oddities are we missing out on?

Thank you, preservationists — Only a few hundred copies of Sega’s traffic game were ever produced. The insurance company that helped create the game, Tokio Marine, sent 200 copies of the game out with 100 Sega Master System console units to its branches across Japan in 1987. It was never released for home use, which makes sense, seeing as it’s really just a three-part driving tutorial.

Let’s Check With a Game! Traffic Safety is comprised of three mini-games called “Driving Sense Test,” “You’re the Best Drive,” and “Pyonkichi’s Adventure.” The game was intended for very young audiences, and each mini-game focuses mostly on decision-making. Oh, and there’s a rabbit riding a bike, too, which seems unrealistic and potentially dangerous.

It’s only by the consolidated efforts of game preservation enthusiasts that we’re lucky enough to see Sega’s strange driving masterpiece. SMS Power, a site dedicated to Sega 8-bit preservation, purchased the original game cartridge for approximately $4,800 last year, after it had sold on the same site for $33,000 ten years prior. SMS Power then joined forces with Tokyo’s NPO Game Preservation Society to translate and upload the game.

Sega’s long-lost traffic game might just be the perfect distraction right now, thanks to preservationist efforts. COVID-19 self-isolation means no one is doing much driving, so you might as well brush up on your traffic logic while home. Please note that there’s no guarantee in-game knowledge will translate well to actual driving. It’s probably a good idea to take any driving advice from a rabbit with a grain of salt.