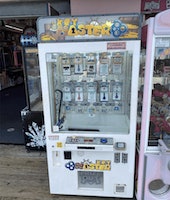 The default number of losses 'Key Master' requires before players can even hope to win a prize.

Chances are you’ve seen one of Sega’s Key Master prize cabinets in some random bowling alley, big box store entryway, or mall arcade over the years — that particularly sketchy-looking “game of skill” requiring players to accurately time the movement of a small, key-shaped token to fit precisely into its proper space, thereby awarding the talented individual knock-off GoPros, Apple Music gift cards, outdated console games, and other similarly “meh” trophies. We would like it to be known that we have always steered clear of this particular con game, because it is so obviously a scam from the get-go... but alas, many far more optimistic individuals have been taken in by the promise of a Nintendo Wii edition of Mario Kart.

So many, in fact, that they banded together and realized the thing was provably rigged, and are now filing a class-action lawsuit against Sega, Play It! Amusements, and Komuse America (the game’s co-manufacturer) for advertising Key Master as a “game of pure skill” rather than one that can only be beat given certain parameters... parameters like the machine purposely amassing at least 700 wins before players are even given a fair shot.

Claimants and their attorneys are currently seeking $5 million in restitution, along with a legal mandate to properly market and advertise these kinds of games.

Advertised as skill-based, but its manual says otherwise — One of the chief bits of evidence given by plaintiffs’ lawyers is that the game manual for every Key Master console literally owns up to the whole damn con within the fine print.

“Nowhere on the Key Master Machine do Defendants inform consumers of the truth: that the machines are rigged so that players can only win prizes at certain times,” the suit alleges. According the legal filing, “the default number of attempts before a player can win is 700,” but that number can also be adjusted manually by the game’s owner.

This isn’t the first time Key Master has come under fire — Key Master has actually been a thorn in Sega’s side for years now, weathering multiple, similar lawsuits regarding the game’s advertised skill versus its more chance- and statistics-based reality.

Most recently, the state of Arizona took an arcade machine distribution company to court over its Key Master sales, with the state’s Attorney General arguing the game should be classified essentially as a gambling game instead, and therefore only allowed in casinos.