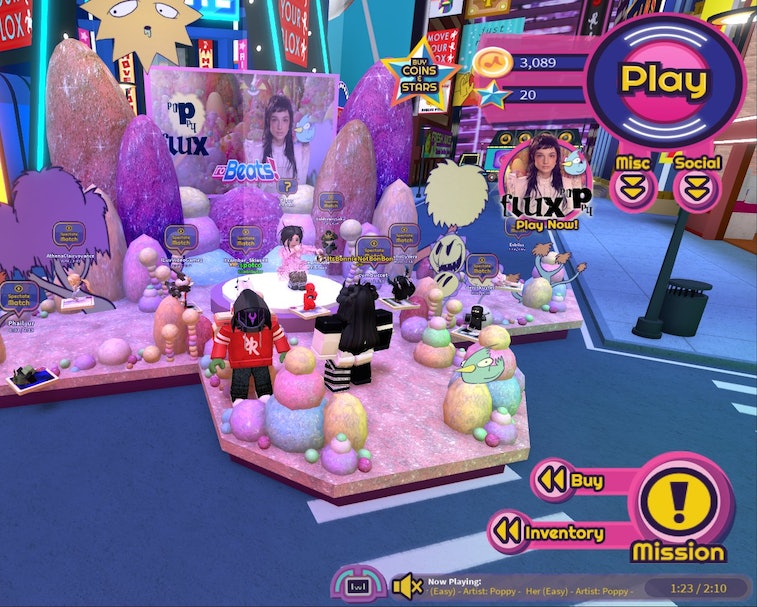 “We want to keep finding new ways to make music more of an integral part of the Roblox experience,” said Jon Vlassopulos, head of music at Roblox. “Allowing Poppy’s fans to enjoy her new album Flux where they are already spending time with their friends seemed like a no brainer, and our developers have jumped at the opportunity to participate!”

Poppy is the perfect choice for a spokesperson to launch this feature, really. She’s spent a sizable portion of her music career presenting as an uncanny android who ranted about internet culture on YouTube. She was also nominated for a Grammy this year. So yeah, a launch party for her music in the Roblox multiverse is pretty spot-on.

Not much to see here — The Listening Party feature is a little less exciting than you might expect based on how Roblox’s execs are talking about it. In practice, it’s less of a new feature than it is just an in-game event.

The basic premise of a Listening Party is to continue whatever task you’re already working on — just with the added option of listening to Poppy’s new album while you do so. Poppy will be “touring” various “experiences” (that’s Roblox-speak for an in-game game), but it’s unclear what exactly that entails. Maybe her avatar will pop up to say hello; maybe not.

Some of the experiences chosen to host Poppy’s Listening Party have created special stages or areas for the event. For the most part it’s just all about spotlighting Poppy’s new album in existing Roblox worlds. You do earn “event points” by playing songs, though, and some virtual merch will be available as well.

Virtual music rules — Roblox already has a vice grip on the minds and hands of children around the world. But the game’s ultimate goal, as many internet companies can attest, is to keep players focused on the in-game world as much as humanly possible.

Roblox has a tricky history with music. Any music streamed in the game is supposed to be licensed first, but Roblox’s many experience developers have absolutely not followed through with this rule. As a result, the company behind the game was slapped with a $200 million lawsuit from the National Music Publisher’s Association this summer.

Music has proven itself a huge pull for in-game events, though. Fortnite has really paved the way for events like this and shown they can be worth the effort. And thus Roblox finds itself working on music-centered events despite the ongoing lawsuit. At least with Poppy involved so explicitly the company should be safe from legal repercussions.