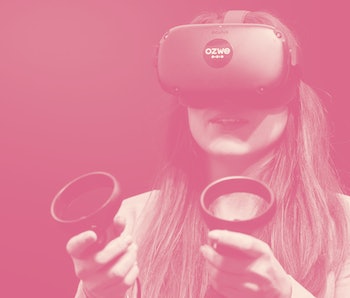 Facebook is working on a new, lighter version of its Oculus Quest virtual reality headset, but it’s facing delays because of the ongoing COVID-19 pandemic, reports Bloomberg. A limited global supply chain and minimized product development are both liable to push the headset back.

Facebook might even be working on multiple versions of the new Oculus. Bloomberg says some of the Oculus models in advanced testing are smaller, lighter, and have a faster image refresh rate for “more realistic content.” The company is also reportedly redesigning the Oculus controllers.

Oculus Quest has seen some major updates in the past few months that position Facebook’s virtual reality system a step above the rest. An improved headset — especially one that doesn’t cause quite so much neck pain — would further solidify the company’s place in the VR market.

Not just for gaming anymore — While Facebook’s Oculus headsets certainly started out as an immersive gaming solution, they’ve now moved beyond that. This past March, a huge software update brought multitasking to the Oculus Quest in what the company called a new “system experience.” Hopping in and out of apps is a breeze now, and universal menus have made the whole system feel more fluid.

Sure, Oculus is still mostly a gaming machine, and a powerful one at that. But it’s obvious that Facebook is looking forward to a VR future where all kinds of productivity can be achieved through its Oculus devices.

VR neck is still a thing — One of the only things holding back Quest — and its competitors for that matter — is its size. The current model weighs in at about 1.25 pounds, which can be hard on your neck after extended periods of use. If Facebook can significantly reduce the physical toll of wearing a VR headset, it will likely be even more appealing to consumers. The new models are reportedly 10 to 15 percent smaller than the current Quest.

Quest is emerging as a winner — Facebook has developed many versions of its Oculus headsets since acquiring the company in 2014, but the Quest has proven the most successful. It’s an ideal mix of affordability, stellar hardware specs, and ease of use. Anyone can pop the headset on and get started. Even Input’s Josh Topolsky, a known naysayer of VR in general, has found his outlook changed by the device.

So it makes sense that Facebook is putting significant resources into furthering its Quest line. A release timeline is still very much up in the air, given pandemic-related setbacks. And the Quest is actually sold out everywhere right now, so anyone looking to nab one is going to have to wait. Facebook’s vision of putting VR headsets in every household might be stalled at the moment, but it’s very much alive and well.