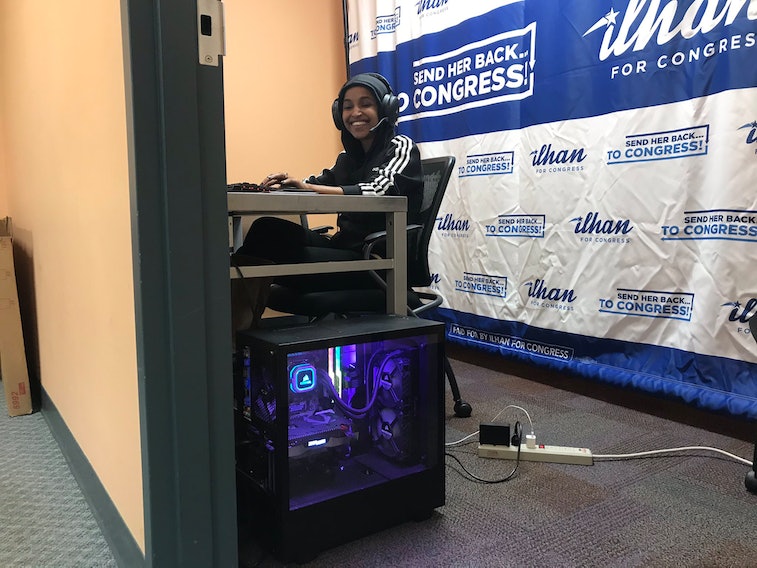 No, it wasn’t a millennial fever dream. Last night, Rep. Alexandria Ocasio-Cortez live-streamed a session of Among Us on Twitch and attracted more than 400,000 viewers. The event was reportedly the third-highest individual stream by viewership in Twitch history. Ocasio-Cortez was joined by popular game streamers for the session, as well as by Rep. Ilhan Omar of Minnesota.

The event was created by AOC as part of an awareness campaign for the importance of voting in the upcoming presidential election. As if this weren’t monumental enough, the stream had the unforeseen side effect of illustrating that Rep. Ilhan Omar is more than just a casual PC gamer.

After Omar posted a photo of herself smiling with her gaming rig in full view, she pre-empted the question she knew the gaming community would be sure to ask — what’s inside your PC?

As far as we can tell, this is the first time in history a politician has posted their custom PC specs. Politicians: they’re just like us. (Except with, you know, much more responsibility.)

Among Us is doing the most — In the train wreck that is 2020, we’re willing to cling to any modicum of togetherness we can find. Among Us is the latest way people have found a sense of community — both dedicated gamers (like Omar) and non-gamers (like AOC) have found solace in the game.

Among Us has actually been around since 2018, but it picked up steam this summer when popular streamer Sodapoppin played the game on his Twitch channel in July. Now it’s being streamed by the likes of James Charles and Pewdiepie (and now politicians, too). The game has been responsible for a massive uptick in Discord downloads, and fans have watched more than 200 million hours of the game on Twitch this year.

Gaming for betterment — Rep. Ocasio-Cortez’s choice of an Among Us stream as a voting-awareness tactic is spot-on. She brought together nearly half a million people and took the opportunity to have productive conversations around everything from voting power to international healthcare.

While older generations have long assumed video games to be nothing more than an unhelpful and potentially violence-inducing distraction from the real world, younger generations have come to understand them as not just fun but legitimately helpful. Rep. Ocasio-Cortez knows there’s a great reason people flock to games like Among Us: they’re one of the only things keeping us sane right now.

Rep. Omar’s PC setup — not to mention the seeming ease with which she pulled out those specs — makes it clear that she understands the benefits of gaming, too. She also obviously knows how to build a great gaming PC. This thing is top-of-the-line.