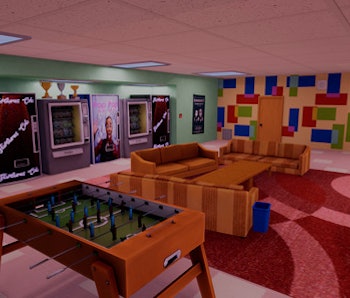 Community had a good run on television. People dug the meta-humor and the sharp pop culture references. Plus, its paintball episode won a pretty nice fan following. That episode just got video game treatment on Steam in the form of 6 Seasons and A Game.

The paintball game is based on that episode from the show and it takes place in what appears to be Greendale Community College. There's a teaser on Twitter, too. Here's what else goes into 6 Seasons and A Game.

Humble and endearing — The game is free and notes pretty upfront that its developer team is made up of volunteers and features a "satirical parody of common thematic elements found in American broadcast television serieses (yes that's actually a word)." When you play 6 Seasons and A Game, you'll notice that the developers dropped a bunch of Easter eggs in the entire arena and tried their best to make the game bright, engaging, and entertaining.

"The purpose of this project is for aspiring game developers to come together as a community to gain experience and to meet different people," they write. "We hope you enjoy joining us on this journey and support the continual addition of special and unique game modes. As long as there is interest in this projects continuation and volunteers to make it happen we will strive to improve this project to make it a unique and fun gaming experience for you to enjoy."

What's refreshing about this free Steam game is that the volunteers are frank about their "limited experience" and make no bold promises about it being the best game on Earth. It's just about stress-free paintball attacks with humble graphics and a few glitches. The creators even say that you might run into unresponsiveness or a bug here and there.

Sometimes, a simple and rather clunky game is all you need. In this case, 6 Seasons and A Game is about a popular sitcom that won many fans over the years. And while it's not Hideo Kojima levels of visual and plot excellence and nowhere near packed with cult levels of success like Animal Crossing, the paintball episode-inspired game does what a good game should: kill a bit of that extra time on your hands without sucking dollars out of your pocket.