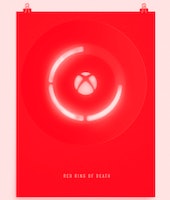 The amount Microsoft estimates it lost due to early Xbox hardware issues.

If you were a gamer circa the mid-2000s, chances are you remember the trauma inflicted by the Xbox 360’s dreaded “Red Ring of Death.” The dark, ominous glow of three-quarters of your console’s power-on lighting meant two things: 1) some part of your 360’s internal hardware was seriously screwed up and 2) that Halo 2 LAN party you had scheduled for the weekend would need to be put on hold indefinitely as you sent your console in for repairs.

While the Red Ring became less of an issue with the 360’s later generations, initial shipments of the console were notorious for randomly shutting down on gamers, and became an Xbox community in-joke. To “celebrate” the unfortunately iconic emblem of failure, Microsoft is currently selling official “Red Ring of Death” posters for $24.99 each. It can’t make up for the disappointment of your youth, but it can cheekily celebrate two decades of vastly improving Xbox consoles.

A major loss for Microsoft — The Red Ring’s cautionary tale is recounted in the new docuseries Power On: The Story of Xbox, which hit YouTube and other streaming services today. While produced by Microsoft, Power On still is a pretty objective look back at the flagship system’s highs and lows over the past 20 years. Episode 5 specifically focuses on the Red Ring of Death, with Xbox’s former chief, Peter Moore, explaining that, “By the time we looked at the cost of repairs, the loss sales that we factored in, we had a $1.15 billion problem.” Ouch.

Major leaps forward — Of course, we know Microsoft not only survived the Red Ring debacle, but went on to maintain its position as one of the top-tier gaming consoles on the market. Case in point: it’s still ridiculously difficult to get your hands on one.