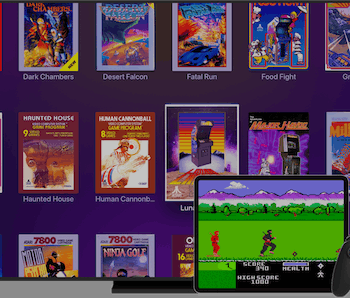 Plex is the latest company to announce a cloud gaming offering. Called Plex Arcade, the premium service allows retro gaming enthusiasts to stream their favorite titles directly over the internet, to nearly any device. The service is preloaded with Atari's entire library, but gamers can upload their own ROMs (digital copies of games) to play anything they want. Plex Arcade is $3 per month for Plex Pass subscribers, and $5 per month for everyone else.

What it is — In case you aren't familiar, Plex turns your computer into a server for any locally stored media library, so you can stream all your legal (or illegal) downloads to any device, be it an iPhone or even Google's Chrome browser. No need to carry around an SSD or transfer files between devices. Plex also conveniently scans your media files and organizes them neatly, in a TV-friendly interface, so you don't have to hunt through file names for the show you want to watch.

Plex Arcade takes this idea and applies it to retro gaming. Many people don't even have a classic console anymore, and play older games by emulating them on PC or other device. With Plex Arcade, you upload ROMs for your favorite classics (they're not hard to find with some Googling) to your Plex server, be they titles for Game Boy, Super Nintendo, or whatever else, after which they're available to play over the internet. While ripping back ups of your own games is legal, downloading ROMs of games is a legal grey area… so keep that in mind.

Google, Microsoft, Amazon, and others have all launched their own game subscription services, but for newer games. Years of investment in sophisticated cloud streaming technology have made it possible to stream console quality games over the web with minimal latency; Plex says it's working with Parsec for its product. By detaching titles from expensive gaming hardware, more people may be willing to get into gaming than otherwise would have.

Who is Plex Arcade for? — The biggest flaw with Plex Arcade is that, well, anyone who wants to play retro games probably already has a solution to do so that works on most devices. And they don't come with a monthly fee like Plex Arcade does.

And if you're not a retro enthusiast who has found a good solution for playing your old favorites, one of the microconsoles like the Super NES Classic will probably be good enough for you. Nintendo, Sony, and others have continued to release these systems that are really just emulators for the original consoles, and preload them with classic titles. But they're easy to use, and sufficient for people who just want to replay some of their favorites a few times.

Plex itself isn't even sure whether many people will want Plex Arcade. In a blog post, the company said the service was conceived as a side-project. It will continue to invest in the offering "if there's interest and we see some subs."

If you're curious to check out Plex Arcade, the company is offering a seven-day free trial.