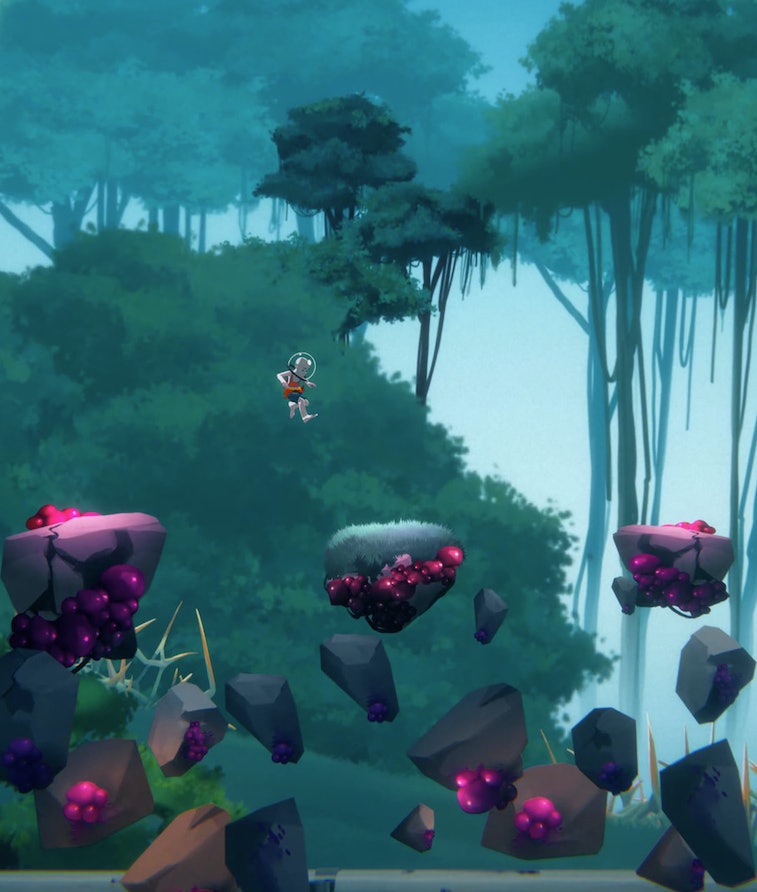 Summer is usually inundated with an endless stream of video game advertisements from events like Summer Game Fest and dedicated press conferences run by console makers like Microsoft, but Tribeca Games has a different vibe entirely.

Since the Tribeca Film Festival first included LA Noire in its lineup in 2011, the festival’s been interested in the storytelling potential of video games, and it ultimately dropped the “film” in Tribeca Film Festival in 2021 to recognize the exciting work it’s spent several years showing from the worlds of games, mixed-reality, and television.

This year’s Tribeca Games selections were no different, spanning nine games, each with fairly different ideas about what your experience of play should feel. I had the chance to try out all of the games, and I’ve collected my thoughts on some of the most interesting inclusions below.

By far the most exciting game I played at the Tribeca Festival was Immortality, which is funnily enough, mostly about the act of watching, cataloging, and organizing old film footage. The game comes from Half Mermaid, the development studio headed by Sam Barlow, the lead designer of Silent Hill: Shattered Memories, and more recently, Her Story and Telling Lies. Like Her Story and Telling Lies before it, you assemble the story of Immortality in your own head as you watch scenes, interviews, and home movies from the elusive, missing, and entirely fictional actor Marissa Marcel, building out a mystery that might not even initially present itself that way.

Barlow’s past FMV (full motion video) games have relied on the thrill of surveillance to keep players interested, and Immortality goes a step further by adding the basic mechanics of film language to its bag of tricks. Anytime you’re watching a clip in the game you can pause, enter “match cut” mode, click on a person, object, or bit of text, and be presented with a similar shot from another clip. This allows you to fluidly move between clips, picking up context on the things you’ve seen as you go.

These aren’t always perfect match cuts like you might be used to — think the spinning bone in 2001: A Space Odyssey that cut to a space station — but they make the experience of navigating the “archive” of footage consistently fun and surprising. Immortality won’t be everyone's cup of tea as a self-directed experience, but if you enjoy a good mystery, taking notes, and digging through archives, Immortality might offer the most refined version of Barlow’s vision yet.

Playing a sequel to the hit, dialogue-driven indie game Oxenfree feels very different in 2022 than I imagine it would have been even three years ago. Mainly because Night School Studio, the creators of Oxenfree and plenty of other games, are now owned by Netflix. Oxenfree II: Lost Signals will be added to the streaming service’s game library, and thankfully, at least based on the small sliver I played, it seems like a really polished sequel.

At first blush, Lost Signals is only mechanically connected to the first Oxenfree. It features the same dialogue system that allows you to reply, question, and interrupt other characters’ conversations, and the same radio you can use to tune to different frequencies and interact with the supernatural. Maybe it’s just the distance between Oxenfree’s release in 2016 and now making the game feel like a breath of fresh air, but everything about the sequel feels more polished. The dialogue is used sparingly, humor is deployed more judiciously, and the puzzle-solving platforming mechanics have been complicated with the new ability to slip into the past.

Playing as Riley and her childhood friend Jacob, you explore Edwards Island, investigating strange supernatural occurrences that should be familiar to anyone who played the first Oxenfree. Being able to not just see bits of the past slip through into the present, but to actually travel there to solve certain puzzles is a minor change to what made Oxenfree work, but feels like it could end up being a major evolution while playing Lost Signals.

I won’t even begin to claim that I’m good at the platforming and bullet-hell boss battles of the first Cuphead, but I can at least appreciate that developers Studio MDHR are trying to make the game a little bit more approachable with its The Delicious Last Course DLC.

The biggest change with the add-on is the inclusion of Ms. Chalice, a new playable character with higher jumps, automatic parries while dodging, and slightly different in-game projectiles. The rest of this new Cuphead add-on seems more or less the same. In the level provided for my demo, I faced off against an ice wizard, who turned into a snow monster, and later a living snowflake, all presented in the same great classic animation style from the first game.

Cuphead is as much an audiovisual feast as it is a mechanically challenging game and that doesn’t seem to be changing with this new addition. The Delicious Last Course is ultimately more Cuphead, and if that’s something you wanted, I think you’ll be really satisfied when this DLC becomes available.

American Arcadia from developers Out of the Blue definitely makes a strong first impression on paper. The game is, in reductive terms, like if The Truman Show was mixed with a narrative-focused platforming game like Inside. In playing it, things are a bit more complicated. You start the game as a working stiff name Trevor, who after his coworker mysteriously disappears, learns that he lives in a city that’s broadcasted live to a television audience 24/7.

Trevor’s storyline plays out in what’s essentially 2.5D, but you also get to assume the role of the mysterious woman on the inside trying to break him out. Her story plays out in first-person, where you’ll similarly have to solve puzzles and hack into the city's cameras to clear obstacles for Trevor, Watchdogs-style. I got stuck between platforms partway through my demo, so it's fair to say what I was seeing was a still-in-development version of the game. The ideas presented were definitely interesting, though, and I like how American Arcadia seems to be adding to the puzzle platformer games that have come before it.

Venba is a narrative cooking game from Visai Games about being an Indian immigrant in Canada and trying to raise a kid in a place that’s not yet your home. The game’s art has a sort of flat, illustrated look with hard exaggerated lines that give everyone in the game a certain amount of character. The demo had me play as Venba making lunch for her husband, with the actual cooking parts working almost like a cooking mini-game from something like Cooking Mama.

What’s unique about Venba are the cultural specifics. In this case, the idlis (a type of rice cake) I was making in the demo were based on Venba’s mother’s recipe, except the recipe wasn’t so much a recipe as it was a few hastily scrolled tips to make the idlis extra fluffy. At least in the demo, cooking was forgiving of mistakes, but it still adds a certain amount of flair to the rest of the game, which mostly seemed to play out as conversations between characters. I think even with just a small slice of the whole game, Venba seems like one to watch out for. There are a lot of nuanced cultural thoughts to be drawn out of something as simple as cooking food for your family.

Of all things, The Cub reminded me the most of Rayman. The new game from Demagog Studio pairs a beautifully illustrated post-apocalyptic wasteland with the frenetic platforming of something like Rayman Legends. In the demo, I played as the titular Cub, a boy left behind on Earth when most of the world fled to Mars to avoid environmental destruction. The Cub was raised by wolves and is only just now remembering that he’s a human when the Martians return to recolonize the planet.

The game is somewhat challenging to play, requiring precise jumps and swings to avoid falling, but the radio broadcast you listen to while you make your way through the overgrown Earth really elevated things. It features conversations from Martians missing home (their adopted home, mind you) and some wild music that makes the game's chase sequences that much more thrilling. The Cub has a tremendous sense of style overall, it’s really stuck with me since I played.

Thirsty Suitors is hard to pin down, but that’s also what makes it so interesting. I played as Jala, a young woman heading home with her tail between her legs after a bad breakup with her girlfriend. She’s visiting her parents to heal, recuperate, and just maybe make amends with her past.

The gameplay is unexpectedly presented as a skateboarding game, third-person adventure game, and turn-based fighting game. Developers Outerloop Games seem to have no qualms in using and discarding whatever mechanic or genre makes the most sense to communicate Jala’s inner turmoil Thirsty Suitors openly refers to itself as a psychodrama, where Jala’s (and others’) internal worlds are projected on the real one, creating a game space that’s fun, flirty, and very over the top. At the core though, Thirsty Suitors seems to be backed by some rock-solid character writing, which feels compelling even when the latest game mechanic gets tired.

The most unique aspect of As Dusk Falls (also check out our sister site Inverse’s hands-on with the game) will likely prove to also be its most controversial. As Dusk Falls doesn’t feature the fluid animations you might now expect even from more narrative-focused games, instead, it draws inspiration from 2D motion comics. Human characters don’t so much move as flip from one stance to another; only occasionally are scenes punctuated with an actual full-frame 3D model, and the game feels largely static.

All of that serves to highlight the composition developers Int./Night use in the quieter moments of As Dusk Falls. With a still, perfectly composed frame, some dramatic moments just hit that much harder. Actually playing As Dusk Falls feels a bit like Until Dawn. You make narrative choices (sometimes these choices are timed), complete quick time events, and otherwise watch events unfold around your choices. In the extended preview I played, the game focuses on two intersecting storylines, a family moving to Missouri, with some kind of familial strife burbling in the background, and a group of brothers staging a robbery that naturally goes wrong. What I’ve played of As Dusk Falls is naturally propulsive, and even if the game hasn’t fully justified its distinct visual style, I appreciate the big swing.

A sequel to a sleeper critical hit from 2019, A Plague Tale: Requiem doesn’t seem to dramatically rethink anything from the first game. But even if it's familiar, the beauty of the game is staggering, from the way each busted-up medieval hovel is drawn to the grimy light that developer Asobo Studio casts everything in. That contrast between the audiovisual beauty of the world and the human depravity of the Requiem’s plague-set story is where most of the game’s power comes from.

So the fact that I found the actual puzzle solving and combat of Requiem to be a little bit frustrating and fiddly didn’t matter all that much. I was immersed in the game’s messed-up world. Playing through the demo, I snuck through a butchery district drenched in blood and later plague-infested rats, using fire to direct rodent traffic and take out cards. It turns out you can do a lot with a slingshot and a little alchemy.