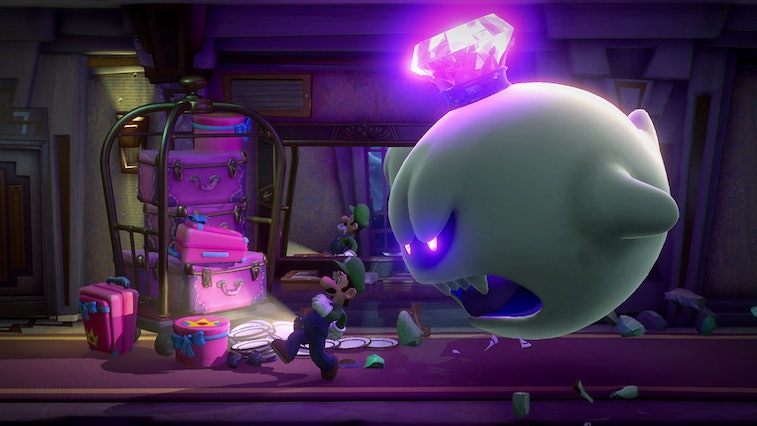 At this point in quarantine, just about everyone has a Nintendo Switch in their arsenal of boredom-crushing devices. And though Animal Crossing: New Horizons has become the de facto playground for Switch gamers all over the world, there are only so many hours we can shake trees and dig holes before that, too, becomes monotonous.

Thankfully there are plenty of other great games on the Switch lineup to dig into — but Nintendo is notably stingy when it comes to dropping prices on its popular games, especially on the company’s official eShop. That’s why this deal is just too good to pass up.

The premise of Luigi’s Mansion 3 is simple: you’re Luigi and you’re exploring a haunted hotel after Mario and some of their other friends go missing. The problem, you see, is that the enormous hotel is full of ghosts — and not the friendly kind.

Lucky for you, Luigi wields a state-of-the-art Poltergust G-00, a state-of-the-art ghostbusting vacuum with lots of sucking and smashing functions. He’s also capable of calling upon his gooey doppelgänger Gooigi to overcome obstacles.

Like Animal Crossing, the latest installment in the Luigi’s Mansion series is lighthearted and multifarious, with varied puzzles and boss battles to keep things interesting. There’s also a full-fledged multiplayer mode that can be played either in-person or via Nintendo Online.

It’s also super inexpensive right now by Nintendo standards — that alone is reason enough to expand your Switch game collection. So what are you waiting for? This discounted game on one of the most critically acclaimed Switch games won't last forever.

Luigi's back to suck up ghosts in another haunted mansion.