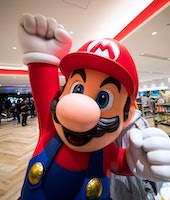 The increase in Nintendo's net profit.

Since the beginning of the COVID-19 pandemic, Nintendo has been one of the companies to enjoy increased sales and consumer attention. The company's most recent financial earnings statement paints an even more enviable picture of the firm. Between the months of April and June this year, Nintendo has enjoyed a solid success streak in the form of:

When it came to its video game sales, the company enjoyed a 113.2 percent increase in purchases. Nintendo's hardware sales were especially lucrative as purchases within this category shot up by 166.6 percent. In 2019, Nintendo hardware sales reached 2.13 million units. In 2020, it reached 5.68 million units.

In 2019, Nintendo's software sales reached 22.62 million units but this year, the company raked in sales for 50.43 million sold units. Digital purchases made up 55.6 percent of the company's hardware sales. Talk about hitting the jackpot.

Here's what's selling like crazy — Nintendo Switch is particularly popular right now with millions of people practicing lockdowns and social distancing. With boredom and loneliness at an all time high, Nintendo Switch offers a digital balm for restless crowds. Since June 30, Nintendo Switch titles like Mario Kart 8 Deluxe, Animal Crossing: New Horizons, and others have enjoyed millions of purchases.

If you dig numbers like we do, it's worth checking out the units sold for each title below.

Some relief for Nintendo — The financial earnings statement is certainly a moment of great relief for Nintendo as the company recently underwent a period of bad press. Several weeks ago, Nintendo had a massive account leak compromising the security of at least 300,000 accounts, the coronavirus initially delayed its Switch shipments to Japan, and its Super Smash Bros community came under fire for reports of rampant sexual abuse and harassment, which the company strongly condemned.

Not to downplay Nintendo's creative genius but the company seems to owe a good deal of its success to the pandemic. Hopefully, these games can retain their hype and appeal once lockdowns ease up and people start venturing out again.