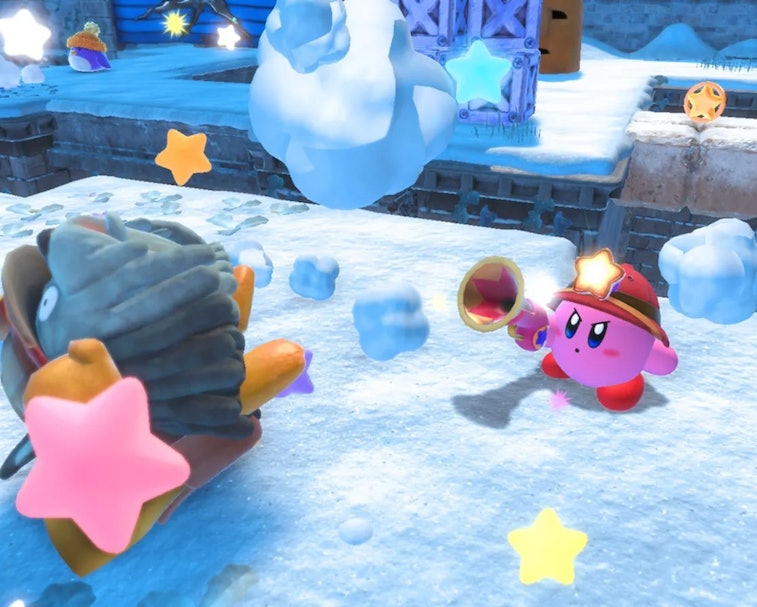 If you're wondering why we never got Super Kirby 64 back in the '90s, Nintendo has finally admitted the truth: the pink puffball's bodacious body held him back from the big time. Well, sort of.

While it's true that Kirby games are traditional sidescrollers, it does seem strange that it took Nintendo 26 years from Super Mario 64 to finally deliver a true 3D title in the series: Kirby and the Forgotten Land. In a new developer blog, HAL Laboratory director Tatsuya Kamiyama explains the main reason for this: given that Kirby's round shape, it's hard to tell which direction he's facing compared to the familiar shape of a certain red-capped plumber.

"The first challenge - and we knew this from the start - was that Kirby's character design was not a perfect fit for full 3D gameplay," Kamiyama said. "Kirby's silhouette is perfectly round. When you're controlling him from behind, it can be hard to tell which direction he's facing at a glance."

In order to deal with this, the developers of the game added a generous auto-aim so that attacks that are slightly off the mark will still hit. True to the series' reputation for low difficulty, they also decided to automate the game's camera movements, since controlling the camera angles in 3D platformers can often be hard or simply frustrating. Additionally, to make Kirby's platforming more forgiving, they implemented a feature called "fuzzy landing" that allows Kirby to jump again when he's close to the ground, even if he's still slightly airborne.

As a whole, these are a nice reminder that while 3D platforming might come naturally to some of us, it can take a while to get used to the control scheme, especially if you're a younger gamer. For the most part, though, we should just be happy that Kirby is finally the star of his own big 3D adventure. The 2.5D classic Kirby 64: The Crystal Shards is a fine game on its own, but he's deserved this treatment for a while, and it's nice to see him get it.