“We are working on putting together a montage... as a way to give voice to the Joy-Con drift issues... This will be helpful to us in responding to Nintendo’s arguments about how this isn’t a real problem or hasn’t caused anyone any inconvenience.”

CSK&D, the law firm handling the class-action suit against Nintendo 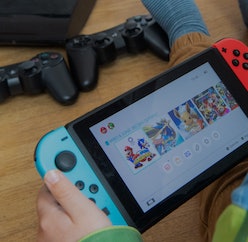 Nintendo is reportedly arguing that the Switch's notorious Joy-Con drift doesn't bother anyone. That's according to the law firm Chimicles Schwartz Kriner & Donaldson-Smith (CSK&D), which is involved in a lawsuit filed last year over the flaw that causes analogue sticks to register movement even when they're not moving.

Reports of the issue are widespread, and Nintendo even somewhat apologized for it publicly, if not directly admitting fault.

Deflect and delay — Back in June, the company's president Shuntaro Furukawa said in a statement that "regarding the Joy-Con, we apologize for any trouble caused to our customers. We are continuing to aim to improve our products, but as the Joy-Con is the subject of a class-action lawsuit in the United States, we would like to refrain from responding about any specific actions."

The lawsuit against Nintendo that CSK&D is involved in began as a public class-action suit but Nintendo was able to move it to private arbitration where the results are confidential and individuals can't easily join the suit to seek compensation. Companies don't like being the subject of class action lawsuits because they can result in very costly judgements meant to reimburse large amounts of people.

CSK&D is asking individuals to send it videos demonstrating the Joy-Con drifting issues they've experienced so it can better respond to Nintendo's argument "about how this isn't a real problem or hasn't caused anyone any inconvenience."

If Nintendo really is arguing that Joy-Con drift isn't an inconvenience, it's admitting that it knowingly stocks the shelves with controllers that will easily break.

Avoiding a recall — The company does offer free repairs of the Joy-Con, probably a subtle acknowledgment of the issue, but that is an inconvenience for gamers because they have to mail the controllers in and wait before they can play again. On Reddit, many users have reported sending in their controllers multiple times only for them to break again within months. The controllers are priced at $80.

Considering that Nintendo has sold more than 60 million Switch handhelds and probably many extra Joy-Cons on top of that, it's understandable that it wants to keep litigation private and avoid admitting fault that would trigger a pricey mass recall. Instead it'll pay some smaller amount to the individuals involved in private arbitration and continue working on an improved controller for the rest of us.