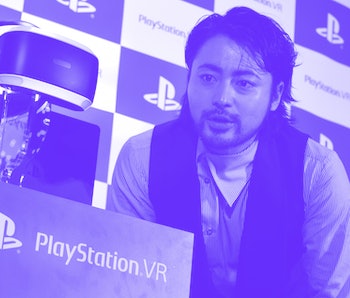 For the most part, Sony has been tight-lipped about the next iteration of its PlayStation VR hardware. We know it’s definitely not coming this year and that its new controllers are weird, curvy masterpieces — but otherwise, it’s all speculation. PSVR fans are left scouring various media reports for breadcrumbs.

Today’s update, courtesy of a report from Bloomberg, is a brief mention that Sony is planning to use OLED panels in the new PSVR headset. LCD bigwig Japan Display Inc. (JDI) is attempting to sway the VR market back toward LCD screens because they can achieve higher resolutions than OLED panels. Sony already has plans to use Samsung’s OLED technology for the headset, though, those familiar with Sony’s plans said.

And then there’s the bad news: Sony insiders don’t expect the new PSVR to launch before the later end of 2022. As in two full years after the console launch. That’s a pretty long wait for tech that could drastically expand the Playstation 5’s capabilities — but then again most people won’t have the chance to buy a PS5 this year, anyway.

To OLED or not to OLED? — Many electronics manufacturers are switching from OLED screens to LCD ones as a cost-saving measure. In smaller devices like smartphones the differences in resolution and brightness are relatively unnoticeable to the average user.

DJI expects more VR headsets to follow in Facebook’s footsteps, choosing slightly lower picture quality over the high costs associated with OLED production. But Sony, at least, is holding out.

Worth the wait — Next to the often breakneck pack of the gaming industry as a whole, Sony is all for taking its time lately. Sometimes that’s by choice — to perfect a product like the new PSVR, for example — while other times the company has found itself stymied by supply chain issues. The PS5 is still impossible to find for this very reason.

Patience is a virtue in limited supply throughout the majority of the gaming industry. Sony’s dedication to creating the best possible hardware for gamers in the face of this pressure is admirable. Its decision to use top-notch OLED panels, rather than moving to cheaper LCD screens, will produce a product with much more longevity and usability.

The wait continues. Based on what we’ve heard about the new PSVR so far, it’ll be worth not having it for another year or so.