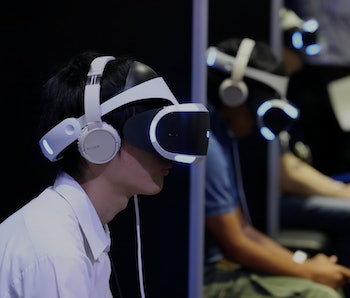 Sony this morning made a big announcement that’s more of a teaser than anything else: PlayStation’s next-generation virtual reality hardware is on its way. But, uh, there’s not all that much detail that PlayStation is willing to share at the moment.

The original PlayStation VR set has been very successful and received generally positive reviews since its first release in October 2016. PSVR sold nearly a million units in its first six months on the market; by the end of 2019, it had sold more than 5 million units, according to Sony’s public metrics.

This success has fuelled intense speculation about how PlayStation might one-up itself with the next iteration of its VR headset and controllers. The original PSVR is compatible with the PlayStation 5, but game-makers have yet to create any next-gen games that incorporate virtual reality. Today’s announcement is just enough to motivate developers to get their new VR games ready for the next PSVR launch.

New controllers on the way — In today’s announcement, PlayStation confirmed that we’ll be seeing a new VR controller alongside an updated headset. Nishino writes that the new controller “will incorporate some of the key features found in the DualSense wireless controller, along with a focus on great ergonomics.”

That abstract nod to the PS5’s new controller alone is enough to catch our interest. The DualSense controller, with its adaptive triggers and haptic feedback, is one of the best parts of the PS5 gaming experience. Even Xbox head Phil Spencer is in love with the next-gen controller.

Though Sony hasn’t shown off any controller prototypes for us just yet, we have seen some patent filings that seem to show the new VR controller’s basic design. That design is a pretty radical departure from the current PSVR controllers, with analog sticks and sensors for finger-tracking.

We’re taking that design with a grain of salt because many patent filings look nothing like the resulting product. It’s been almost a year since that filing and the accompanying research video, too, and the controller’s design has likely changed since.

Now the wait begins — PlayStation has whet our appetites with today’s announcement — and left us with a warning that we won’t be able to purchase the next-gen VR headset any time soon. “There’s still a lot of development underway for our new VR system, so it won’t be launching in 2021,” Nishino says.

At the very least, we’re hopeful that Sony’s promise of inevitable new VR hardware will set some creative wheels spinning over at VR game development studios.