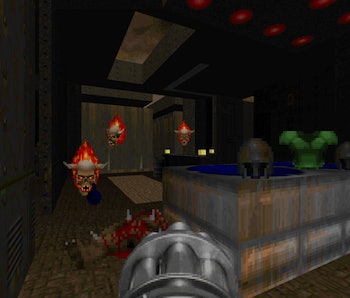 John Romero is recognized as the co-designer and co-programmer of the seminal FPS game Doom II, and has created the first new level for the 1994 classic since its release 28 years ago to raise money for the ongoing Ukrainian war effort. The level is being dubbed “One Humanity,” and is available for purchase through his website for 5 euro. All of the proceeds will go towards “the Red Cross and the UN Central Emergency Response Fund to help support the people of Ukraine during Russia’s invasion.”

Considering the fact that it hasn’t been two weeks since the conflict began, that Romero was able to turn around an entire level within a matter of days is impressive. Those interested in supporting the cause will receive “One Humanity” in the form of a .WAD (the default format to package files for DOOM). Users will need an original copy of DOOM II and a “modern source port” to access the level.

Taking a stand — Romero releases “One Humanity” at a time when a number of brands, institutions, and even individuals are evaluating what they can do to aid a brutal conflict that doesn’t look like it will end in the near future. Nike suspended its online sales in Russia, while other sportswear companies have followed suit through a similar deferral of services.

We’ve also seen the opposite side of that coin, with opportunists looking to capitalize on the war through scammy Instagram pages.

Whether or not support continues to roll in once the conflict is no longer the biggest story in the news cycle is another question entirely, but for now expect to see more efforts like Romero’s.