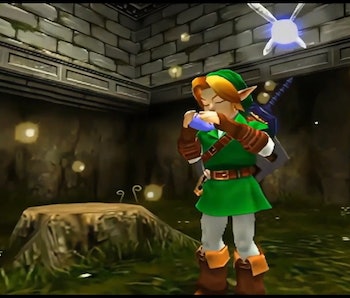 Here at Input, we've previously discussed how the new Nintendo Switch Online "Expansion Pack" - which features N64 and Sega Genesis games — is a whole lot of buck for not a lot of bang. Unfortunately, it's gone from bad to worse, as those poor souls who paid $50 for the right to play WinBack: Covert Operations in 2021 have come to a rude awakening, as it appears that these N64 games do not run particularly well on the Switch.

According to a lengthy ResetEra thread documenting the problems, the Switch's emulation of these Nintendo 64 classics leaves a lot to be desired, with many players reporting input lag, confusing button layouts, garbled music, and frame-rates on even low-intensity games like Yoshi's Story. Several users have described it as beta-quality at best, and it seems that the input lag is so bad on some games (such as Super Mario 64 and Mario Kart 64) that they're difficult to even play at all.

Sad but true — These hiccups will come as no surprise to those who have firsthand experience with the messy world of Nintendo 64 emulation. Yes, despite the fact that the console is 25 years old at this point, N64 emulators are very demanding and sometimes inconsistent, even on powerful PCs that are many times more capable than your Switch.

This is because early 3D video game consoles like the Nintendo 64 and the Sega Saturn have very specific and unusual hardware limitations that are almost unrecognizable today, and developers of the era had to use technical trickery and wizardry in order to get games running on these platforms. As such, it took literal decades for the emulation communities to progress to this point, and while they're still not perfect, they're a lot better than they used to be.

Take it or leave it — Even if you set aside the the technical limitations of the Switch — and the ridiculous price tag — this is an embarrassingly poor offering from Nintendo. According to the thread, players don't even have an obvious way of rebinding the controls, which seems like an issue that could be easily addressed. Zelda speedrunner ZFG went to Twitter to state that the performance of Ocarina on Switch is even worse than that of Wii U Virtual Console, which should be considered a low bar to clear.

Take it from us: unless your kids have a strange aversion to PC monitors and you really need to show them the glory that is Star Fox 64, this is a bad deal. Do not give Nintendo your money for this astoundingly bad deal. Play Metroid Dread instead.