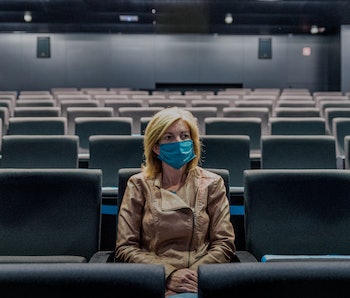 Movie theaters have been one of the hardest-hit businesses during the COVID-19 pandemic — cramming people into small spaces for hours at a time doesn’t exactly jive with public health concerns. As such, theaters around the world have had to be increasingly creative with their revenue-seeking endeavors.

Theaters in South Korea are now starting to rent out their screens to gamers ready for their digital adventures to be truly larger-than-life, the BBC reports. CGV, the largest theater chain in South Korea, recently began allowing customers to rent entire auditoriums — with 100 to 200 seats each — for their gaming parties.

Eui Jeong Lee, a 25-year-old student, said it’s actually the sound quality in the theater that impressed her the most. “The sound of the gunshots is just so vivid, and when something flew directly at me from the screen I even screamed,” she told the BBC.

CGV’s current rental prices are about $90 for two hours at a time before 6 p.m. The price spikes to about $135 from 6 p.m. to closing. The cinema doesn’t provide any consoles or games, so customers have to bring those along with them, and only four people are allowed in a rented auditorium at any given time.

That $135 is nowhere near the revenue CGV would’ve brought in from a packed movie showing — a 200-seat auditorium, even at half capacity, would bring in revenue of about $1,200 for the company per screening. But without many new films being released, CGV knew it would have to think outside the box to stay alive.

Games in theaters just makes sense — Seung Woo Han, a CGV employee, thought up the business venture after realizing video games and movies are very, very similar. “Both have a storytelling aspect to them, so if someone can enjoy watching a film in a cinema, I thought they would also enjoy playing computer games in one,” he said.

Thus far, the venture — which is called Azit-X, after the Korean word for “hideout” — has mostly been used by men in their 30s and 40s, though CGV says couples and families have taken advantage of it, too. The theater chain’s auditoriums have been booked 130 times so far.

Get creative or go bankrupt — The pandemic has not been kind to the entertainment industry. Ticket sales around the world dropped more than 70 percent in 2020, according to Variety — a nearly $30 billion plunge from the previous year.

Some theaters in the United States and Canada have also attempted gaming rentals as a new revenue stream. U.S.-based Malco Theatres has been doing so since November, for example, but the company says it hasn’t helped much. “Nothing is adding to our profitability at this point,” said Karen Melton, director of marketing at Malco. Other theaters are trying options like popcorn and candy delivery in an attempt to bring in more cash.

AMC, the U.S.’s largest theater chain, has been allowing customers to book entire auditoriums for private screenings. This, too, can only bring in limited revenue; AMC needed a nearly billion-dollar cash injection in December to stave off bankruptcy.

The general vibe in the movie theater industry is not optimistic. Still, the industry’s death knell could actually be good for entertainment from a consumer point-of-view. And, in the meantime, the industry’s biggest player is getting help from Reddit, of all places. Spare a thought not just for movie theater owners, though, but for those poor souls whose last movie was Cats. Because there must be a lot of them.