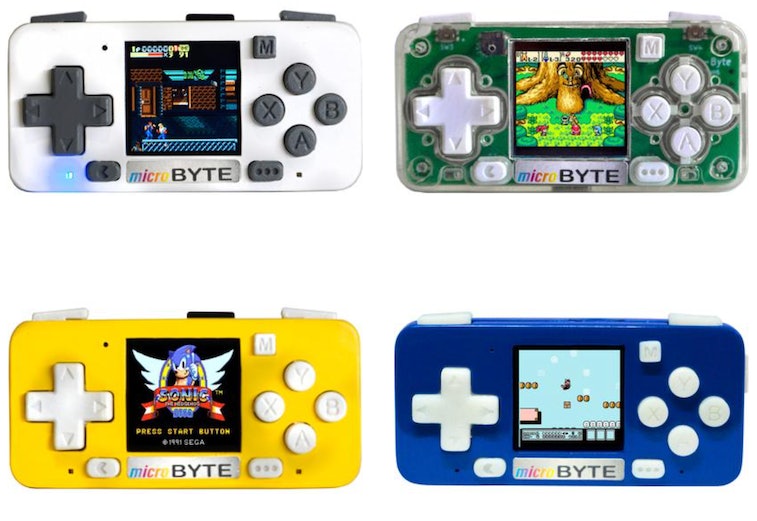 Byte-Mix Labs, a small company in Spain, has launched a crowdfunding campaign for a mini retro-console called the microByte that's capable of playing games from a series of classic handhelds. The team is halfway to its goal of raising $3,750 to take the product into limited production.

You'll be squinting — The microByte, as the name suggests, is a small handheld — its display comes in at only 1.3-inches diagonally, with a resolution of 240-by-240 pixels. For the controller, it uses the SNES gamepad layout. Overall it's reminiscent of the oft-forgotten Game Boy Micro or the Game Gear Micro that Sega brought out last year. But the microByte is more versatile, said to be capable of emulating games from the following consoles at 60 frames per second: NES, GameBoy, GameBoy Color, Game Gear, and Sega Master System.

Another notable aspect of the microByte is that it's supposed to be open-sourced and fully compatible with Arduino IDE. That means you can build new apps and games and run them on the microByte by loading in a MicroSD card.

Since that screen is so small — just 1.15 inches diagonally — Sega even released an optional Big Window Micro magnifying class, a recreation of the Big Window for the original Game Gear.

Impractical — While these retro devices like the microByte and Game Gear Micro are kind of neat, they're also unnecessary when it's possible to run emulation software on a computer or smartphone and use a controller attachment to play. But maybe you're nostalgic for the original experience of playing Worms: Armageddon on a tiny screen.

Be warned, there's no guarantee that Byte-Mix Labs will successfully deliver the microByte — the team outlines some challenges it may face during production on its crowdfunding page. But the microByte only goes for $45, so you won't be out too much money either way.