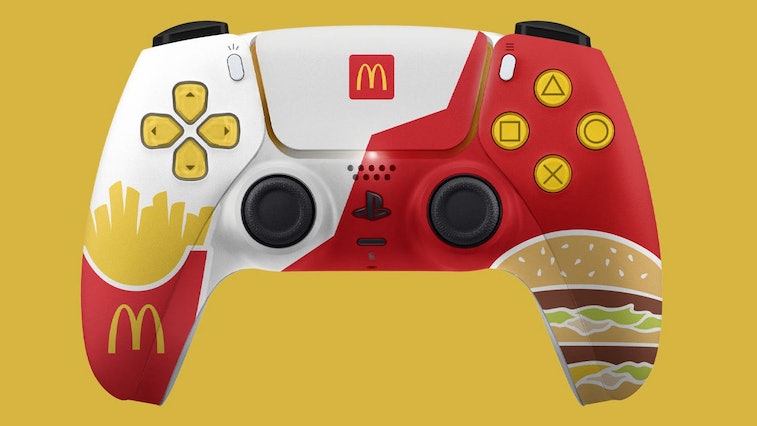 McDonald’s contemplated creating a custom, burger-and-fries-themed PlayStation 5 controller. But the product was never meant to see the light of day, instead promoted on accident by McDonald’s in Australia.

Press Start earlier reported on the (somewhat gaudy) controller, which McDonald’s Australia initially said would be produced in limited quantities and given away as part of “Stream Week,” a weeks-long event celebrating 50 years in Australia for the fast food chain.

The event will feature live streams of popular games where viewers can win various prizes — but not the controller, it turns out. McDonald’s initially said it would produce just 50 of the controllers, but later walked that back, saying Sony had not authorized the product.

PR mistake — It turns out now that the controller was included in promotional material by mistake, as McDonald’s had only toyed with the idea and never been in contact with Sony about an official collaboration. In a statement provided to IGN, McDonald’s said "the image was provided to media in error and there is no commercial relationship between McDonald's Australia and Sony PlayStation."

McDonald’s has also postponed the week of events to a yet unannounced later date.

The idea of a custom PlayStation 5 controller wouldn’t be totally unheard of. McDonald’s has found a lot of success of late making its food feel fresh through collaborations with the likes of BTS and Travis Scott. Besides some new dipping sauces for the former’s chicken nugget meal, the food is largely unchanged but gives fans a reason to make a visit anyway so they can ask for the “Cactus Jack” meal and everything Scott himself would order. The limited-edition nature of the promotions can offer a temporary boost in sales. It’s unclear how much money artists make off the promotions, though Travis Scott reportedly made at least $5 million.

Plenty of collabs — McDonald’s occasionally collaborates on merch, like when it worked with Diamond Supply recently on a collection of merchandise to coincide with the premiere of Space Jam: A New Legacy. These types of limited edition drops can lend the brand some cachet by associating it with things that are hip and cool while giving a fashion brand an easy boost in sales.

Sony rival Microsoft recently announced that Krispy Kreme in the United Kingdom would release an Xbox-themed doughnut (donut?). Customers who buy the doughnuts are entered to win an Xbox Series S and a month of free Game Pass. The marketing ploy isn’t... promoting good eating habits. But it’s at least a creative way to get people talking about the new console.