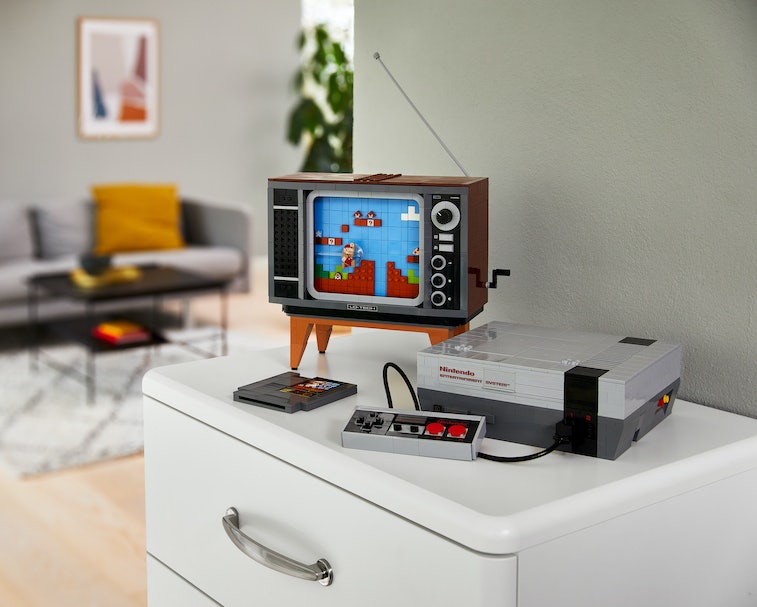 Update 07.14.2020: Lego released official images and a video of the forthcoming NES set today, so we've added those below.

Lego is releasing a 2,646-piece Nintendo Entertainment System (NES) set this August, and now, thanks to leaked photos, we know exactly what it’s going to look like. And yes, it’s tickling every nostalgic bone in our bodies in just the right way. If there's any potential downfall for this thing it's the high price point.

The forthcoming NES set is an extension of the soon-to-be-legendary team-up between Lego and Nintendo. That partnership is already set to include a Lego Super Mario game that will let you build and play real-world game levels, complete with power-up packs like the now-infamous Cat Mario.

Nintendo released a very dark five-second teaser trailer for the NES brick set Monday morning on Twitter, asking the internet if we’re ready to “play like never before.”

Unfortunately for Lego and Nintendo, full photos of the NES set leaked around the same time, pre-empting an official announcement by either company. In better news, the set looks incredible. This will be a must-have for collectors and nostalgia-lovers alike.

The deets — The Lego NES isn’t just a console — it’s truly a complete set. Hence the nearly 3,000 bricks it’ll take you to build it.

Building the set will leave you with a detailed NES console, a controller (complete with a wire to connect it), a Super Mario Bros. game cartridge, and a vintage TV.

No, you can’t play games on it — But Lego does have some surprises in store for you. That beautifully rendered television has an operable hand-crank on the side that makes an on-screen 8-bit Mario jump up and down while a classic level from the original game literally scrolls from left to right.

The leak — The pictures below from VJGamer showed off the set before Nintendo even announced it. It also made it clear that if you get one of the new Mario sets and place Mario on top of the TV, you're in for a surprise. We now know what that is: he'll play the iconic soundtrack to accompany your brick-based side-scrolling action.

It’s, uh, expensive, though — A Lego set this complicated — and with such a notable brand attached to it at that — was always guaranteed to be, well, not cheap. German site StoneWars says the NES set will be priced at $299 euros, which is approximately $340. You’ll be kept plenty busy for that cash, but there are also full, actually playable game systems you could buy for less than that. That is still cheaper than the $380 asking price for Lego's Lamborghini Sián, though.

Nonetheless, we’re super excited to see the Lego NES in action. It's sure to quickly become a collector's item for Nintendo stans and Lego lovers alike... and would regardless of the price. Who knows what other surprises Nintendo has in store for us? We’ll have to wait for the next leak to find out.