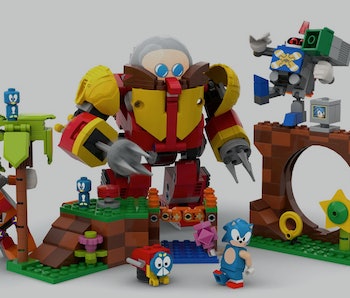 Lego has been on an incredible roll when it comes to collaborating on video game-themed projects. Its latest might just be its most exciting yet — and most impressive is that the set actually began as a fan project.

Lego will produce an official Sonic Mania set based on a concept created by a fan who goes by the name “toastergrl” in Lego’s online Ideas community. Toastergrl, whose real name is Viv Grannell, originally posted the concept to the Ideas site at the end of February 2019 — and now nearly two years later it’s becoming a reality.

Grannell submitted her Sonic project as part of Lego’s Ideas program, which allows community members to vote on their favorite fan-made designs. If a design garners enough attention from members of the Ideas community, actual Lego designers will review the project and decide whether or not it’s exciting enough to actually produce it. This Sonic Mania set ended up with more than 10,000 supporters by March 2020 — enough to send the designs onto the next stage.

The most important question is yet to be announced, though: when can we get our hands on it?

Viv’s excited and so are we — We’ve seen many times over that video games make for incredible Lego sets — and that Lego blocks even work really well for building working video game systems. But Sonic is an untapped franchise for Lego.

Sonic’s aesthetic works perfectly in the Lego universe, and the series has a dedicated fanbase (except Input’s reviews editor) ready to scoop up any and all Sonic nostalgia.

“I’ve loved the Sonic series since I was a kid — his vibrant, colourful world fit my sense of aesthetic perfectly,” Grannell said in an interview with the Lego team, “The wacky antics of his multiple cartoon series (on reruns at that point) endeared me to the characters, and the compelling but not punishing platforming titles… engaged my brain at a formative time.”

It’s this fabulous energy that Grannell brings to her designs. Her passion for the project is infectious.

Fan collab at its best — There aren’t many companies willing to commit to the somewhat arduous process of working with fans on their designs. Lego’s approach to this collaboration — only reviewing projects backed by lots of fans — is a great way to cut overhead while ensuring projects will have loyal followers when they’re eventually released.

Finalized designs and a release date for the Sonic Mania set will be available soon, along with those for another fan favorite: the Vincent van Gogh Starry Night set.