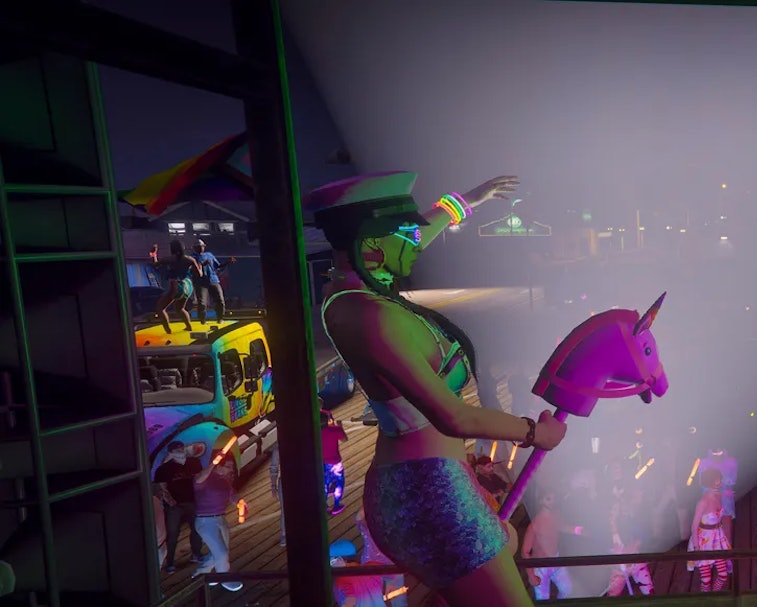 Pride Month may be over, but we’re not ready to stop talking about it. As reported by Polygon, gamers recently threw a massive party celebrating LGBTQ+ representation to cap off the month of festivities... inside Grand Theft Auto.

Usually, you play as a criminal driving around at reckless speeds and getting into all types of other trouble, and the online version of the game includes community-run servers where people role-play as different characters and act uncharacteristically civil. In the New Day role-playing server, a group got together to throw an in-game Pride parade.

Digital coming together — Polygon interviewed the parade’s organizer, a user named Peacheslatoure, who role-plays as Jeb Miller, a character who grew up couch-surfing and trailer hopping. He says that he wanted his character to “represent the dreams of LGBT youth” who daydream about moving to big cities and finding acceptance for who they are.

Peacheslatoure said he doesn’t live in a major city where parties are most accessible. That’s why he organized last month’s events. “Myself as a player, I am a LGBT youth who is not as fortunate as others. I use roleplay as an outlet to express who I wish I could be to the public.”

Extra af — The New Day community celebrated Pride with dances, beach parties, and an end-of-month parade. They were so committed to the role-playing that the server’s Public Works Division — yes, they have one of those — came out and set up the official route through the city. During the finale, Jeb stood on a large float as the parade worked its way through the streets. A DJ meanwhile spun up some tunes, and everyone had a good time.

It just goes to show that sometimes that the internet can be good, despite its myriad of flaws.