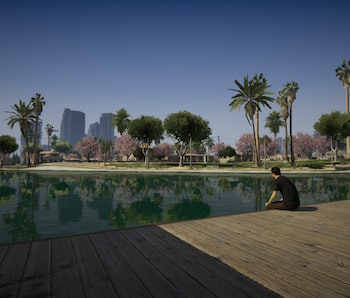 Long-time fans of the Grand Theft Auto series are used to waiting long periods between new entries in the series. But we’re now going on eight years since Rockstar Games released a new GTA, and it’s begun to feel a lot like we’ll never see another.

Now a prominent leaker by the name of Tom Henderson is making a bold claim: that Grand Theft Auto 6 won’t be released until 2025. Henderson has a really good track record, as far as video game leakers go; in the past he’s leaked accurate details of Call of Duty and Battlefield 2042 games.

Rockstar Games and its parent company, Take-Two Interactive, have both been incredibly tight-lipped about GTA 6 development. We really don’t know whether or not the game actually exists. Rumors of the series’ next entry have been circling the internet since… well, basically since GTA 5 released back in 2013. Nearly eight years later, we know almost nothing else about the next Grand Theft Auto — except that it definitely won’t be coming out in 2021.

What we know so far — It wouldn’t be much of a stretch to say we know nothing at all about GTA 6. The game itself would be nothing but an unconfirmed rumor if not for this Kotaku report from April 2020, which provides an inside look at Rockstar Games’ culture. The report focuses on how Rockstar has shifted its work culture away from stress and crunch, but there’s one hint here about the next GTA game (namely that it exists at all):

One plan that management has laid out for the next game, a new entry in the Grand Theft Auto series, is to start out with a moderately sized release (which, by Rockstar’s standards, would still be a large game) that is then expanded with regular updates over time, which may help mitigate stress and crunch.

Take-Two’s most recent earnings release details the developer’s planned releases for 2021, and there’s no mention of the kind of high-budget category GTA 6 would fall into. The company did say it has two more “immersive core releases” coming in 2023 and 2024, which could allude to a big hit like GTA 6, but it’s really just too soon to tell.

Details are otherwise just rumors. Henderson says GTA 6 will be set in modern-day Vice City, but previous reports hinted at a 1980s setting. Henderson also suggests the GTA 6 map will change over time a lá Fortnite.

Worth the wait — Rockstar isn’t just sitting around twiddling its thumbs; the developer has been very busy with the Red Dead series, which released two major titles since 2018. The company also ported GTA 5 for the Playstation 5 and Xbox Series X, allowing fans to play the hit on next-gen systems while waiting for GTA 6.

The long wait for GTA 6 is likely influenced by many factors, not the least of which is the general backup created by the COVID-19 pandemic. Last year, Rockstar also set itself some far-reaching goals to avoid crunch time and, in turn, better the wellbeing of its employees.

Patience is a virtue many gamers could use a refresher on. We might not see GTA 6 for a few years still, but it’ll definitely be worth the wait. And hey, maybe by then we’ll finally have found a PS5 to play it on.