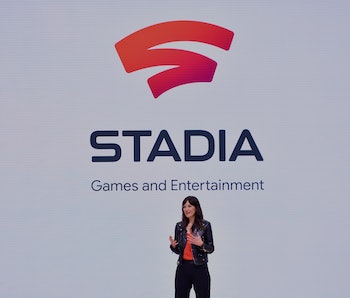 Google is updating Stadia so that players can use their smartphones as a controller while playing on their TVs, according to 9to5Google. Stadia has supported using third-party controllers pretty much since launch, so you’d really have to be in dire straights to resort to using your phone’s display, but we’re all for more options. You can’t, however, use a keyboard and mouse to play on your TV... at least, not yet.

Stadia is Google’s cloud gaming service, which it announced in 2019 to much fanfare. The idea is that if console-quality games can be streamed over the web, it opens up the market to many more potential gamers who might not want to invest in consoles, gaming PCs, or other hardware and can instead play using devices they already own.

It’s intended to help Google get a piece of the very lucrative video game market. Other companies including Amazon and Nvidia have seen the potential and launched their own similar cloud-based services, with mixed success.

We’ll stick to a controller — As anyone who’s tried to play Fortnite on a smartphone will know, there are plenty of reasons not to use your smartphone as a controller, chief among them being that it’s usually a very poor experience. But maybe you’re a casual user and you want to check out the service without committing, or perhaps you destroyed your controller in a fit of rage but still want to play while you await the replacement’s delivery.

Support for alternative controllers requires Android TV, Google TV, or a Chromecast Ultra. Setting it up requires adding the controller or enabling touch gamepad support through the Stadia mobile app.

Slow build — Google’s execution of Stadia has been lackluster, as many promised features were absent at launch and the game library has been added to less speedily than many users had hoped. The company also has a fierce competitor in Microsoft, which launched its own cloud gaming service and subscription program called Game Pass, which gives players access to hundreds of AAA games for $14.99. Microsoft already has a large library of first-party games which it can add to its cloud offering including franchises like Halo and Doom, the latter of which it acquired with its purchase of Bethesda.

Stadia, too, offers a subscription service, but the offerings lag far behind Game Pass with a large collection of mostly indie fare. And the service doesn’t even have its own mascot like other game companies. Nintendo has Mario, Microsoft has Master Chief, but Stadia doesn’t have anything of the sort to draw people in.

Google says it stands behind Stadia and will continue to add more titles over time, despite closing its own in-house studios. And when Resident Evil: Village was released on May 7, Google threw in a free Stadia controller and Chromecast Ultra if consumers bought it for the platform... so it seems it’s still interested in growing its userbase, even if it’s given up on making games from its service itself.

UPDATE (09/30 12 p.m. ET): A previous version of this story intimated that Stadia supporting third-party controllers was a new feature when it has been an option since shortly after the service launched. We’ve amended the story accordingly.