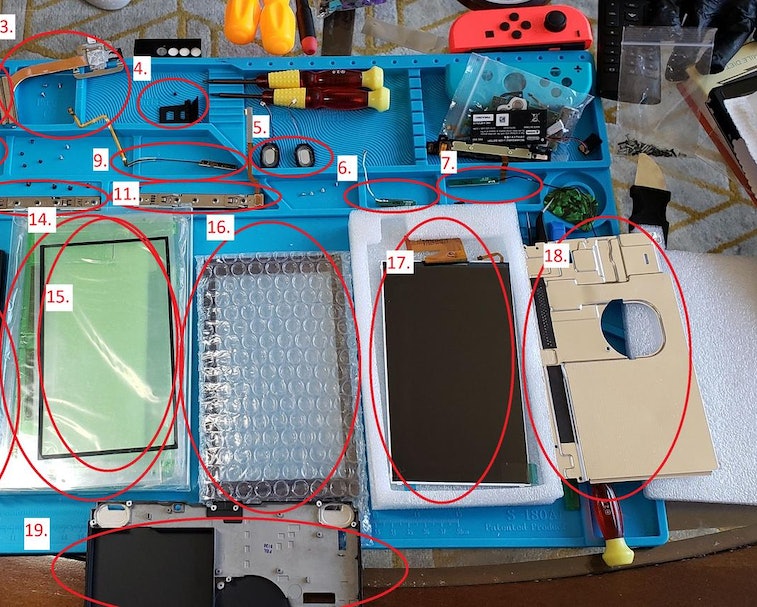 In the midst of our current global nightmare, Nintendo has been having the best year of any of us. Its latest console, the Switch, has sold out across the United States, leading to price gouging ghouls on eBay and Craigslist marking the device up by hundreds of dollars. So one Reddit user said "screw it" and built his own.

Sarbaaz, as they're known on r/NintendoSwitch, sourced all of the parts for the project from OEM manufacturers and recycled Switch units that have seen better days. Overall, the build for this standard model Switch only ran to about $199 (the retail price of the smaller, less feature-rich Switch Lite). A full-sized Switch normally costs $299.

A labor of love — This, of course, assumes one has the time and inclination to source every individual part for the gadget, wait for them to ship, receive each package, and then begin the tedious process of assembling everything — which, if you've ever even done routine maintenance on a JoyCon, you know is a considerable amount of work.

In the post, Sarbaaz added that the DIY Switch was made for a friend who was laid off:

"Know many people have commented on time is money and a few hundred isn't much. But the truth is my friend who this is for was laid off due to the virus and aren't sure when their savings will dry up. It seems like a luxury to own a gaming console in that financial bind but with only a Netflix account it seems like a good mental health device while sheltering in place.

Apart from this project I haven't really had anything to do either and it was nice to focus on something I felt was productive."

To those concerned that this project would somehow affect the bottom line of Nintendo, one of the most profitable companies on the planet, Sarbaaz added:

"Well the way I see it is I recycled parts that would have gone into the trash anyway. 8% percent of the parts were from Switches that had other issues that kept them from being playable. I don't understand why you believe it is wrong to be less wasteful. You would give $300 extra dollars to someone who bought out a stores inventory in order to take advantage of a quarantine?"

Fair enough, Sarbaaz! We hope you enjoy Animal Crossing: New Horizons. Now, may we interest you in some accessories?