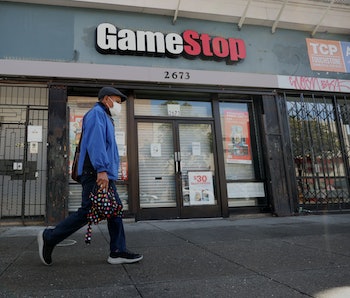 GameStop has revealed in its Q4 2020 earnings conference call that it is expanding the sorts of products it stocks and sells, The Motley Fool reported. The company, which has traditionally dealt with gaming consoles and related accessories, is venturing into markets it has mostly remained absent from, including PC gaming hardware, monitors, and gaming televisions.

"These categories represent natural extensions that our customers would expect to buy from us, expanding our addressable market size by over five times," CEO George Sherman said, "and over time, will reduce our reliance on the cyclicality of the console-based gaming market."

PC gaming and graphic cards are sizzling hot right now. Consumers are desperately trying to get their hands on Nvidia's GeForce RTX 30 series as well as the Radeon RX 6000 series, for instance. But coveted GPUs vanish from digital shelves before you know it and get resold on places like eBay and Craigslist for much higher price tags. It’s unlikely GameStop will be able to stop that, but giving gamers more options for places to buy hardware is welcome nonetheless.

The devil is in the details — Financial experts warn that the stock rollercoaster GameStop experienced earlier in 2020 is divorced from running a sustainable business in the long term, Business Insider reported.

The outlet pointed to investment firm Wedbush Securities which wrote in its GameStop earnings assessment, "The high-profile sustained short squeeze seen in recent months has spiked the share price to levels that are completely disconnected from the fundamentals of the business. As a result, we are unwilling to recommend the shares to investors." Those words would unsettle any board member.

It makes sense then that GameStop executives are trying to diversify the company’s offerings and create stability, hopefully also bringing better defense against socio-economic troll campaigns by the r/WallStreetBets subreddit in the process.

As Axios notes, GameStop board member Ryan Cohen (of former online retailer Chewy fame) is one of the big names behind the company's major transformation plans. This push to expand GameStop’s catalog comes alongside Ryan's calls for a "shake-up" at the company.

As gaming industry bigwigs like ex-Nintendo of America president Reggie Fils-Aime and former Activision publishing president Kathy Vrabeck plan their exits from GameStop’s board, alongside chief customer officer Frank Hamlin (who leaves on March 31), GameStop could use a little stability. Considering how much demand there is for PC gaming and graphic cards, the only question is why it didn’t make this move sooner.