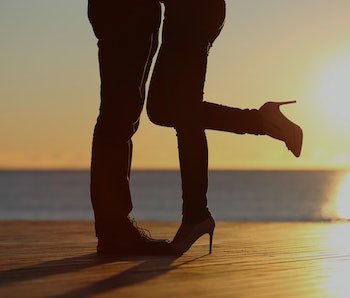 To celebrate Ariana Grande’s upcoming in-game concert “performances” beginning tonight, Fortnite released a new celebratory “bear hug” emote yesterday for players costing 200 V-bucks. Less than 24-hours later, however, and the gesture is nowhere to be found in the game’s store or Fortnite itself. The reason? Uh... well, it’s probably better that we show you so you can just see for yourselves.

Yeah. Last we checked, that move was not called a “bear hug”... although, ironically, said move does contain the same number of letters in its common, English version. Anywho, Fortnite issued an official, carefully worded announcement about its little oopsie via Twitter, stating simply that emote is “temporarily disabled and removed” from the Item Shop while they “fix an issue” with it, adding that players “who have already purchased the emote will be able to make a tokenless refund sometime next week.”

Ari’s only the latest celebrity Fortnite cameo — Ariana Grande’s “performances” as part of the game’s Rift Tour are only the most recent in a string of big-name gimmicks Epic trotted out for Fortnite. Just last month, players saw a ton of LeBron James content (for a price) in anticipation of the release of Space Jam: A New Legacy, including a digitalized version of the new King James sneakers.

A different kind of dirty for Fortnite — Aside from crass, but still very funny, in-game bugs, there’s been a whole different sort of dirty action going on behind the scenes at Epic Games for months. Back in May, we saw the long-awaited start of Epic’s legal battle with Apple over the latter’s App Store profit policies, a stand-off which both sides show no sign of ending anytime soon.

As expected, the start of the trial was somewhat of a mess, but it still remains to be seen how the whole thing will shake out. While Apple certainly has engineered a monopoly via the App Store that forces many developers into unavoidable binds, don’t start thinking Epic is the “little guy” in this battle. This is, after all, the company that is also suing a Chinese AR glasses maker Nreal because of its name’s alleged similarity to Epic’s video and videogame graphics-making platform, Unreal Engine.