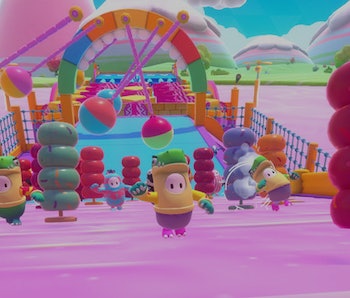 It was amazing news for anyone looking forward to playing the game through Microsoft's subscription catalog. However, when the comment was shared on Twitter, Devolver Digital simply tweeted, "That's incorrect."

The publisher was asked to confirm if the game would hit Xbox Game Pass for PC users and it tweeted, "There are no plans for Fall Guys to come to any form of Gamepass." Of course, this pissed off a bunch of people. Someone asked Devolver Digital for its source. "Our dark lord Satan," it responded. Touché.

Don't be surprised — If you've been keeping an eye on Devolver's co-founder Graeme Struthers' past statements, you might not be shocked by this development at all. Back in May, Struthers told GameSpot that he wasn't too excited about or keen on subscription services.

The problem, in Struthers' opinion, was that adding a game to a subscription catalog would inevitably bury it under other games. It's a classic issue of analysis paralysis for the average game — too many options could mean Fall Guys falls out of video gamers' rotations. To keep the intriguing Fall Guys phenomenon alive — which you can read more about over here — Struthers steers away, not toward, services like Xbox Game Pass.

"The world of subscription is a worry. And we're active in these areas, so we can't stand on the sidelines and just complain about these things. Game Pass, PlayStation Plus, and Apple Arcade, they are things we are participating in," he told GameSpot last year. "You do wonder if it's going to lead to a situation where there is so much content that you kind of fall off the edge. That's the one that keeps us up at night."

It's not an unreasonable worry to have as a publisher. You want your game to continue to receive attention on its own. Shoving it in a library with other titles might be convenient for a gamer as far as access goes but it's a risky step to take for a developer. It's one of Struthers' main worries. "That," he told GameSpot, "and Donald Trump, and Boris Johnson." At least one of those is no longer a problem.