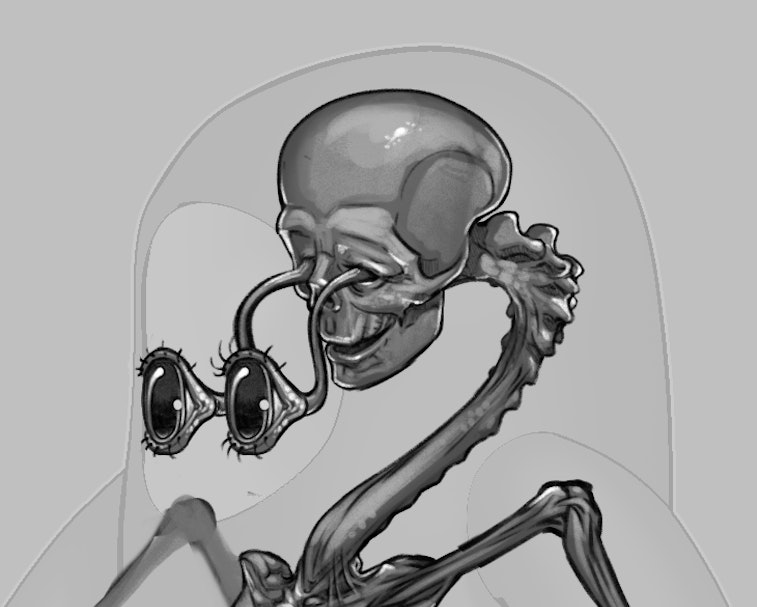 "Be careful what you wish for," is the old adage. Well, just in case there was any doubt about the truth behind that statement, here you go: Fall Guys official Twitter account released its internal anatomy artwork for its once-cute little bean characters earlier this week, and oh, good LORD...

KILL IT WITH FIRE

Equal parts human, chicken, and xenomorph — We're sorry to put you through this, but there was no way in hell we planned to internalize this on our own. Just... where to start? They swear the character is happy, although they also note they can't take this back, either. Equal parts human, chicken, Gary the Snail, and H.R. Giger art, the Fall Guys skeletons are pure nightmare fuel, plain and simple. "Sometimes I like to ruin nice things, and seeing as I'm working on Fall Guys, and I love me some speculative anatomy," wrote Tudor Morris, the artist behind the cursed character design, on his Instagram post caption.

When reached for additional comment, Morris was tight-lipped about the creature's origins, and whether or not we should fear for our own safety right now. He did mention that the responses have been pretty much uniformly positive so far on his end.

"I'm afraid I won't elaborate more than what I've said in the original post in specific relation to the cursed fall guy anatomy, but in terms of similar sketches if you look back through my Instagram my 'training' is very much rooted in anatomy and creature design," Morris responded. "It's always been a pretty keen interest of mine, I was the strange child at the bottom of the garden lifting up rocks and looking at bugs." A quick perusal through his other surreal, intricate designs certainly confirms this.

For those out there who just wiped the blood from their eyes, and still need some more context about Fall Guys in general, allow us to quickly bring you up to speed on the latest battle royale video game phenomenon. And while Fall Guys is currently only available on PC and PS4, there are certainly indications the title could be coming to mobile devices in the near future. Until then, well, I guess we're just getting started on Halloween a little early this year, aren't we?