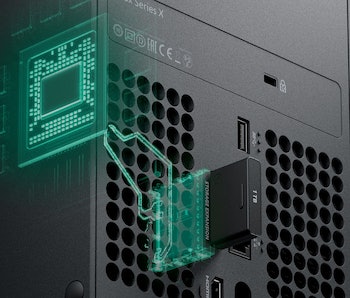 One of the main woes of next-gen gaming is storage space. Those ultra-modern graphics make for huge game files, it turns out. Consequently, we’re already waiting with bated breath to hear how we can expand the storage capabilities of the imminent, next-gen Xbox and PlayStation consoles.

Today we have a glimpse of how much that expanded storage space will cost. Video game deal-hunter extraordinaire @Wario64 noticed this morning that Best Buy has listed the custom expandable storage for the Xbox Series X and Series S. And, as expected, it’s not cheap.

According to the listing on Best Buy’s website, a 1TB custom Seagate solid-state drive will run you $219.99. Yes: adding extra storage to your Series S will cost nearly as much as the console itself.

That might seem like a high price point for expandable storage, but it’s pretty much par for the course when it comes to ultra-fast NVMe SSDs. And it’ll be more than worth it for the sheer number of games you’ll be able to fit on it.

Do I need this? — The drives are designed to cut load times, essentially, to zero. While that's nice, it's not something you'll need for every day. The value of such a high-prices purchase also depends entirely on which console you’re buying and how many games you’re planning to play. And, of course, how much space those games take up.

Most Xbox One games take up anywhere between 30 and 50GB of space on the console. That average might go up a bit for the next generation of consoles. Some popular games do take up more space, though — topping 100GB each in some cases, especially with updates and downloadable content.

Microsoft’s flagship console, the Xbox Series X, comes with a full terabyte of disk space. That may seem like a lot, but gamers tend to fill these drives up pretty quickly. The Series S, on the other hand, has just half that, coming in at 512GB of storage space.

Those who purchase the less expensive console choice will run out of storage space much more quickly — and all your games will need to be downloaded, seeing as the Series S cuts the optical drive.

You can also buy literally any USB drive — There is another option for those working on a budget: purchase any non-NVMw USB drive. External hard drives with 1TB of storage space can easily be found for less than $50.

The expandable storage we’re seeing here is custom-tailored to the new Xbox consoles; it plugs into a dedicated slot and is optimized for playing games while they’re stored on it. Buying a traditional external hard drive won’t provide the same experience, but you can still copy games to and from your Xbox when you’ve run out of space.