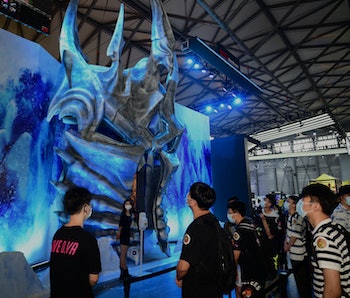 More than a thousand employees at Activision Blizzard have signed a letter condemning management’s response to a lawsuit alleging widespread sexual harassment at the company. That’s according to Kotaku, which received a copy of the letter that was sent to company leaders today.

The letter comes after Activision was sued last week by California’s Department of Fair Employment and Housing. The department accuses the game developer of promoting a “frat boy” workplace culture which included allowing women to be harassed without consequence.

Sexism has long persisted in the gaming industry, which has traditionally skewed heavily toward men. Even though women spend more money on games overall, most developers today are male. That can reinforce problems, though, as women feel alienated in an environment surrounded by men who don’t necessarily understand their concerns or know how to behave appropriately.

In just one horrendous story documented in the lawsuit, a female employee died by suicide while on a company trip, which the suit claims was “due to a sexual relationship she had been having with her male supervisor,” who was found to have brought sex toys on the trip. It was also cited that the woman had previously faced intense sexual harassment at work, including an incident where a photo of her genitals was passed around by male employees.

Contesting it — Activision’s response to the two-year lawsuit was a near-complete dismissal, saying that “DFEH includes distorted, and in many cases false, descriptions of Blizzard’s past,” calling it the work of “unaccountable State bureaucrats.” The company’s chief compliance officer, Frances Townsend, sent a strongly worded rebuke to staff, calling the lawsuit “meritless.”

Even though the company said that it had made reforms aimed to fix its culture in recent years, employees clearly disagreed. Speaking to Kotaku, an organizer of the letter said over 800 employees quickly came together to take action and demand more action. That suggests that things inside Activision are not, in fact, fixed.

Public pressure— The way that Activision leadership has responded doesn’t suggest the letter will change much. The company’s chief operating officer, Joshua Taub, has also strongly pushed back against the allegations, telling employees in an all-hands meeting that they should let the handling of the matter remain internal. “The best way for protection is reaching out to your supervisors, hotline and avenues,” Taub responded. That even though the lawsuit suggests the harassment came down from people in power.

Being a public company, Activision’s stock briefly dipped following news of the lawsuit but quickly rebounded. Negative press could potentially impact sales and force management to respond differently. It’s unclear how many regular gamers would actually hear the news and stop playing Activision’s popular titles like Call of Duty. But, hopefully, the board of directors does the right thing in this case and pushes more serious reform.

If all else fails, unionization is also a potential way for co-signers of the letter to organize and collectively bargain for change. There’s been a growing tide of unionization in tech, media, and related industries, with companies including Google and The New York Times seeing staff unionize.