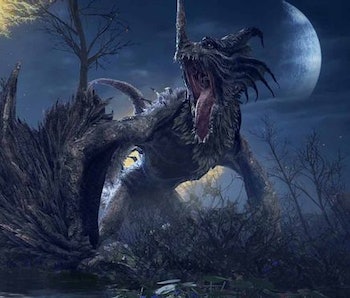 Elden Ring’s release date has been pushed to February 25, 2022. The much-hyped game’s official Twitter account posted the announcement this morning.

“Thank you for your trust & patience,” the game’s team wrote. “We look forward to seeing you experience the game in the Closed Network Test in Nov.”

Fans patiently awaiting the game’s release — it was meant to come out on January 22 — will at least be comforted by the upcoming Closed Network Test (CNT), which will open to select players in November. The CNT signup page is now live on Bandai Namco’s website.

At least we’ll see it soon — The frustration would-be players may feel in response to this delay has, at least, been balanced by the announcement of Elden Ring’s first beta test. The CNT will allow testers to play a curated portion of the game, in an effort to measure console performance and network load.

Those interested in participating in the Closed Network Test can sign up by filling out the form on Bandai Namco’s website by November 1. Anyone over the age of 17 who owns a PlayStation 4, PlayStation 5, Xbox One, or Xbox Series S|X can participate. Testers will be chosen using a lottery system.

The network test will be conducted in five three-hour sessions:

Testers can opt to play during one or more sessions. The team warns that parts of some sessions may end up being unplayable due to “maintenance or server failure.”

Perfection and burnout prevention — Elden Ring is one of those AAA titles that’s been teased for so long it almost feels like a myth. First teased at E3 2019, the collaboration between Game of Thrones’ George R.R. Martin and Dark Souls’ Hidetaka Miyazaki showed almost no game footage for two full years.

That long release cycle has left some feeling frustrated. It’s a balancing act game developers face quite frequently, these days — they want these massive games out in the world as soon as possible, but rushing it too much leads to employee burnout and unpolished gameplay.

We all watched the Cyberpunk 2077 fiasco go down last year; we’ve seen just how awry this balancing act can turn if handled improperly. Take your time, Elden Ring team. We can wait.