Dropping almost $2K on this special edition 'Resident Evil' gets you... a peacoat 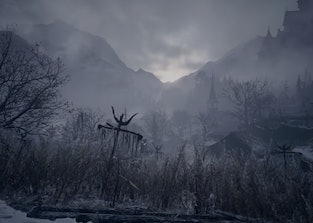 The price of the Resident Evil Village Complete Collector's Edition.

The 10th installment in Capcom's survival horror series, Resident Evil Village, is set to be released on May 7, and fans have an opportunity to treat themselves to some very pricey, special edition swag. The most expensive limited-run edition is going on sale in Japan, where the Resident Evil Complete Set Collector's Edition can be yours for $1,800 (192,500 yen). Welp.

For that price, you're getting everything that comes with a standard Collector's Edition — the game, of course, as well as a Chris Redfield statue, a special box, an artbook, and more. But this edition uniquely includes a wearable replica of Redfield's Chester coat.

That price, though — $1,800 is... quite a step up from the normal Collector's Edition price of $219. And looking at the coat you're getting, well, it doesn't seem very special. It's pictured below in size medium (though the coat is available up to size XL):

And for comparison, here's a screengrab of the coat from the Resident Evil Village debut trailer:

It's... a coat — Practically speaking there aren't any buttons, which would be kind of annoying in cold weather. But hey, if you're fighting off zombies you'll need to reach for your gun quickly. Unbuttoning a peacoat might be the difference between life and death.

Otherwise, it feels a bit of a stretch to call this a "replica" of Chris Redfield's coat. His coat is an ordinary coat! Nobody is going to look at you out in public and say, "Oh, is that Chris Redfield's coat?" The webpage describing the Complete Set Collector's Edition doesn't help much to distinguish the piece, either, saying only that Redfield's coat has been "commercialized under thorough development supervision."

Avid fans only — Hopefully it feels premium at least, because this coat isn't doing it for us. You can get a similar looking peacoat for $130 from Superdry, or $200 from Lands' End. Throw in the standard Collector's Edition and you're still saving quite a bit of money.

But who knows, maybe the limited nature of this release alone will be enough to justify it for the most avid Resident Evil fans. And Capcom will probably make a good profit too.

Resident Evil Village will be available on PlayStation 5, Xbox Series S / X, PS4, Xbox One, and PC. As you can see in the gameplay video below, the graphics should be pretty stellar. In the game, Ethan Winters returns as the protagonist, seeking answers to Redfield's actions after his unexpected return, but players take the role of a character simply dubbed "The Maiden."

Capcom last week released a playable demo for the game on PlayStation 5, with versions for other consoles expected later this year.