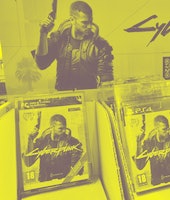 By now, the whole Cyberpunk 2077 saga has truly taken on the air of an eternally raging dumpster fire. Last we heard, CD Projekt Red’s latest patch to the consistently beleaguered, buggy video game actually managed to somehow make things worse for certain players. Before that, in a particularly meta turn of events, pissed-off hackers reportedly managed to sell valuable private corporate data, including source code from both Cyberpunk 2077 and The Witcher 3. With CD Projekt Red’s stocks taking quite the tumble in the ensuing months (about 57% since the game’s release) following all the mishigas, one might assume the company’s bigwigs would see at least some financial consequences for the past year’s worth of avoidable messes...

Nope. That’s now how capitalism works, silly. CD Projekt Red’s co-CEOs Marcin Iwiński and Adam Kiciński are both reportedly taking home an extra 24 million zloty — approximately $6.3 million — in corporate bonuses for 2020, according to the studio’s recently released annual financial statement. And they aren’t the only employees winning while their customers are literally and figuratively losing.

Rewarding failure — It’s not just Iwiński and Kiciński raking in obscene extra cash from failure. As Business Insider breaks it down, board member and Cyberpunk 2077 project director, Adam Badowski, is seeing a $4.2 million bonus, and five other board members are splitting an additional $28 million. Other senior employees reported “closer to $15,000 or $20,000,” while another $29.8 million is being divvied up between 865 employees for about $34,000 each.

It’s all in the fine print — The fact that Cyberpunk 2077 plays so terribly that Sony straight-up removed it from its online store is really beside the point when it comes to dividends. Awful reviews and irate fans don’t change the fact that the title sold 13 million copies in its first 10 days, which are the sort of numbers really all execs care about, at the end of the day.

According to CD Projekt Red’s financial reports, 20% of annual earnings is dedicated to profit-share bonuses — half of which goes to employees and the other half to board members. “We earned this money and the company earned this money, of course, but more net profits, more bonuses... we have results, we get bonuses, and that’s the contract we have,” co-CEO Kiciński told Business Insider.

So, in a nutshell, CD Projekt Red is arguing we shouldn’t blame it for making piles of cash despite putting out a flawed product before it was ready for primetime and disappointing plenty of its customers in the process. We should blame ourselves for giving them our money, which... actually, that’s kinda fair, in a macabre way. Hey, at least everyone’s getting a taste, not just the bosses. This is some consolation, we hope, for what they’ve endured, not only from their own employers putting the squeeze on them to meet an unrealistic launch date, but from angry consumers.