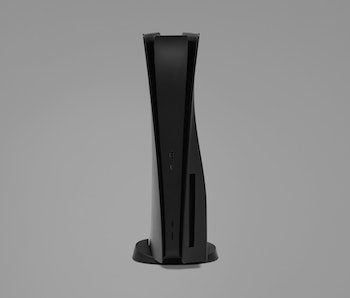 Dbrand, clearly the pettiest skin-maker on the market, made a big swing on Christmas Day. In a Reddit post, it revealed a matte black faceplate for the PS5, obviously eager to face legal action from Sony. The faceplates won’t be ready until 2021, but the company is ready for a fight, if necessary.

No skin in the game — A month ago, Dbrand canceled and refunded orders for its PS5 skins in an even more acerbic Reddit post. It compelled fans to not order the skins because the application process would be too cumbersome for them.

“We’ve seen you assholes try to apply the corner of a smartphone skin. Trust us when we say you can’t handle an application that’s 9x the size,” the post reads. “The truth here is that we have no interest in selling a product that will generate a dozen customer complaints for every purchase.”

The post also laments the dreaded white space in even the best skin application, citing it as an additional reason to abandon its plans to help you customize your PS5. Of course, you could always paint your console, but it’s not the simplest or cleanest fix.

"Sue us, Sony" – CustomizeMyPlates.com walked and shattered every bone in its body, only so Dbrand could potentially fly too close to the sun itself. Undeterred by its predecessor’s failure, Dbrand is intent on being the only PS5 faceplate purveyor out there.

The easy-to-detach plates are allegedly intrinsic to Sony’s intellectual property rights for the console, but its patent filings are intentionally obtuse, likely to limit leaks. Executive hints, rumors, and its utter decimation of CustomizeMyPlates suggest the company may monetize proprietary faceplates or release an all-black version of the PS5 in the near future.

Right-to-repair — Given the PS5’s massive footprint, it’s in Sony’s best interest to have other options available for its design-conscious users. As detachable parts, the faceplates actually get into right-to-repair territory. While some may say a custom plate isn’t a repair, should a faceplate get damaged, it’s swappable nature should allow users to fix it without getting a completely new console — especially since many people don't even have a PS5 yet.