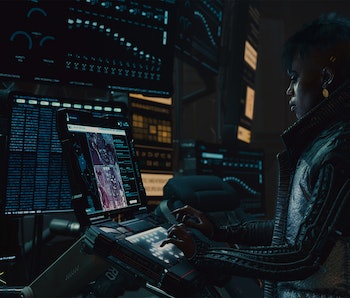 After literally years of hyping up its next-gen graphics and complex storytelling techniques, Cyberpunk 2077’s release has been… far from stellar. CD Projekt Red, the game’s developer, knows the glitches are out of control — and now it's gone as far as to release an apology statement about it.

Early this morning (in the United States, that is), CD Projekt Red tweeted a lengthy statement in which it acknowledged Cyberpunk 2077’s poor performance on the last generation of consoles.

“First of all, we would like to start by apologizing to you for not showing the game on base last-gen consoles before it premiered and, in consequence, not allowing you to make a more informed decision about your purchase,” the statement reads. “We should have paid more attention to making it play better on PlayStation 4 and Xbox One.”

CD Projekt Red is going further than simply apologizing; the company also mentions in its statement that it plans to refund any players who have been unhappy with the game’s performance. If for any reason Xbox or PlayStation will not refund the game on their respective platforms, players can email the developers directly at helpmerefund@cdprojektred.com for assistance.

We’re playing the last-gen version right now — Where to begin with this statement? Let’s start at the beginning: the version of the game we’re all playing right now is not optimized for next-gen consoles. The Xbox Series X and PlayStation 5 versions of Cyberpunk 2077 are still in development limbo, with an estimated release of some time in 2021.

That means the Cyberpunk 2077 with all the glitches is technically a last-gen release right now. It’s an Xbox One release; it’s a PlayStation 4 release. And yet the game’s creators admit to not paying enough attention to how the game runs on those very consoles after seven years of development — which, by the way, means the creation process began before the Xbox One and PlayStation 4 had even been released.

Given that next-gen consoles are ludicrously difficult to come by at the moment, most Cyberpunk 2077 players are, indeed, exploring Night City on either a last-gen console or a PC. This is no small problem.

Patches incoming — Some good news: CD Projekt Red is working to fix the problems everyone’s reporting. After admitting (albeit briefly) its development shortcomings, CD Projekt Red also mentions two forthcoming patches. The first will be released in January and the second will be in February; both will be “large” and “should fix the most prominent problems gamers are facing on last-gen consoles.”

Some minor updates have already been released, the developers say, and more will be coming in the next seven days. And thus the crunch time continues even after launch day.

CDPR played itself — It’s nice that CD Projekt Red is acknowledging the elephant in the room. Doing so also confirms our fears: the developers definitely could have done better here.

Developmental problems aside, CD Projekt Red also could have easily avoided such a high-stakes situation here simply by managing some of the enormous hype it’s been handing out for years. As recently as last month, co-CEO Adam Kaciński said the game was running “surprisingly well” on the PlayStation 4 and Xbox One.

It’s possible that, by February, Cyberpunk 2077 will actually be free of its major glitches on last-gen consoles. Perhaps another delay would have been preferable to releasing it early before paying attention to how it plays on the consoles most people are using to play it.