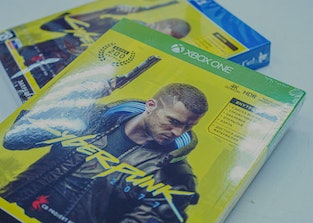 How much CD Projekt Red's founders' stake in the company declined for a time this week.

After years of hyping up the game's next-gen graphics, CD Projekt Red, the Polish developer behind Cyberpunk 2077, has taken a beating on the stock market for the title's poor, well, graphics. The game missed expectations by a long shot, and consequently CD Projekt's stock has fallen to around $22 per share, down from a high of $31 on December 4, seven days before Cyberpunk's release. That's what happens when you fail at your one job, apparently.

According to an estimate from Bloomberg, that drop means the company's four original founders have lost a collective $1 billion in wealth based on their combined 34 percent stake in CD Projekt. The sour turn of events must surely must be disappointing considering Cyberpunk 2077 was one of the most anticipated games of the decade.

A litany of woes — The game should have been a marquee title to close out 2020. The stars were perfectly aligned — a game anticipated for its ray-traced graphics and high attention to detail, launching during a peak holiday season for consoles. Instead, CD Projekt's self-imposed crunch time to release the game in 2020 meant that corners were cut in exactly the areas where Cyberpunk was supposed to shine. On consoles, players have reported that high frame-rates have been achieved to the detriment of visuals, with low-resolution renderings of objects and textures abounding. On PCs, users have reported repeated crashes that are only fixed by disabling ray-traced effects. Weird bugs are also common.

Owners of previous-generation consoles are reporting the worst performance issues, even though CD Projekt's co-CEO Adam Kaciński said ahead of launch that the game ran "surprisingly well" on those consoles.

The company has since come out and apologized for poor performance, offered refunds to customers, and says patches are on the way for the Xbox Series X and PlayStation 5 that should boost the visuals on new consoles by leaps and bounds. That has helped the stock rebound somewhat.

This didn't have to happen — It's hard to say exactly what caused this whole mess to happen. CD Projekt could have waited until the game was actually ready before releasing it. Cyberpunk didn't have to come out when it did — players already waited eight years for the game, and they could have waited a few extra months for the kinks to be worked out. CD Projekt probably wanted it out simultaneously with the new consoles, however. It's also possible the scope of the open-world game just became too much that development times kept stretching further out and CD Projekt decided there had to be a date when it would be released, bugs be damned.

No matter the reason, management screwed up royally here. Cyberpunk is undoubtedly remarkable in many respects — it has a great original soundtrack, an expansive universe in the form of Night City, and an interesting plot. But that was all undermined by a poor roll-out. You have to feel bad for all the developers who were forced into extended overtime to finish their beloved game, only to be pilloried so badly by the public.

The lesson: don't try and sell a game before it's ready.