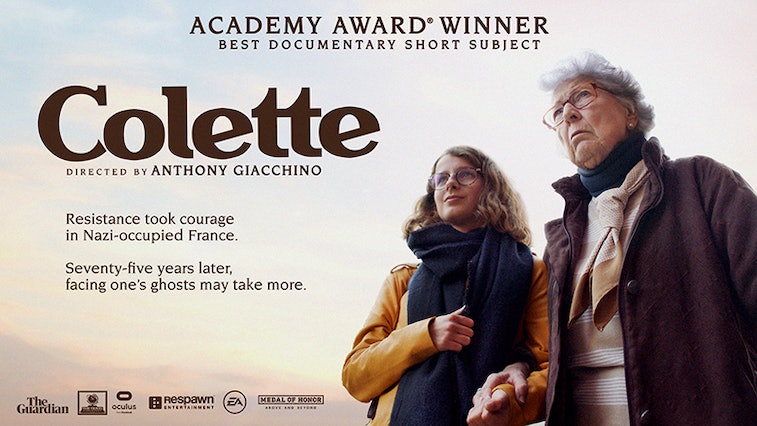 Last night’s Academy Awards ceremony was more low-key than usual, but it still brought about quite a few exciting historic moments, like Nomadland director Chloé Zhao’s win as the first-ever for a woman of color. Another historic win — which flew more under the radar — is for Colette, a documentary short about Nazi-occupied France that actually debuted in an Oculus VR video game.

A documentary that first premiered in a virtual reality Medal of Honor game has won an Oscar. There’s a sentence we didn’t think we’d ever be saying.

Colette was created by Oculus Studios and EA’s Respawn Entertainment; The Guardian later picked it up for wider distribution. The 24-minute documentary follows Colette Marin-Catherine, one of the last surviving members of World War II’s French Resistance. It’s featured in Medal of Honor: Above and Beyond, an Oculus VR game, but it doesn’t include any gimmicky virtual reality presentations. Instead it focuses on lending historical credence to the game via traditional two-dimensional storytelling.

Colette’s win sets an enormous precedent for crossover between the gaming industry and other entertainment markets. Expect to see much more interest in in-game films in the near future.

Bad game, great film — Perhaps most intriguing about the saga of Colette is that it wasn’t centered in a particularly good game. Medal of Honor: Above and Beyond has received middling-at-best reviews from major outlets like IGN, and it’s sitting at just a 6/10 on Steam based on more than 1,000 reviews. The Gallery feature — which is where Colette is featured — generally receives the most positive praise in both user and critic reviews.

So it’s really the film itself that stands out as exemplary, mediocre game be damned. Oculus Studios director of production Mike Doran said in a statement: “The real hero here is Colette herself, who has shared her story with integrity and strength.”

More of this, please — There’s great merit to Colette’s ability to win an Academy Award despite its strange origins. Oculus took a big chance when it put such resources behind in-game storytelling — and that risk has paid off big time. Winning on Oscar is no small feat.

Any executives in the gaming industry would be remiss to watch this success and not say wow, that’s actually a really great idea. Storytelling is one of the most important functions of a good video game, and putting resources behind making a game’s story compelling and unique is key to achieving staying power.

If we’re lucky, game-makers will take note of Colette’s industry-breaking success and attempt the same in their own work. If we’re even luckier, the games themselves will be much more fun to play than Medal of Honor: Above and Beyond.